The Arkansas Valley Conduit (AVC) is a major infrastructure project that upon completion will convey a reliable municipal and industrial water supply from Pueblo Reservoir to 40 communities serving a projected future population of 50,000 in Southeastern Colorado via pipelines. The area includes water providers in Bent, Crowley, Kiowa, Otero, Prowers, and Pueblo counties.

These areas are dependent on groundwater supplies that are in many cases contaminated by naturally occurring radionuclides such as radium and uranium, or by direct influence of surface water that contains harmful microorganisms and pollutants. These communities increasingly face expensive alternative remedies such as reverse-osmosis, ion exchange, filtration, and bottled water. A reliable source of clean, safe water is needed for the area’s health and welfare.

The AVC is designed to provide a long-term sustainable water supply to these communities through initial treatment and conveyance by the Pueblo Board of Water Works to the beginning of the AVC near Pueblo Memorial Airport. When completed, the AVC will supply as much as 7,500 acre-feet annually to these communities.

The Fryingpan-Arkansas Project Act, signed in 1962 by President John F. Kennedy, authorized construction of the AVC, but it was never constructed because the communities could not afford 100 percent of the costs. Public Law 111-11, signed by President Barack Obama in 2009, provided 65 percent federal funding for the Arkansas Valley Conduit. A preferred alternative was identified in 2014.

The U.S. Bureau of Reclamation worked with Project sponsors (the Southeastern Colorado Water Conservancy District) to reduce costs, the need for federal appropriations, and the time needed to construct the AVC.

Congress provided a $28 million appropriation in 2020 to move the Project into construction.

The Arkansas Valley Conduit (AVC) has a long history dating back more than six decades.

Cities and chambers of commerce in Southeastern Colorado began talking about a pipeline project in the 1950s as a way to deal with a chronically poor water supply in the Lower Arkansas Valley. The Arkansas River had been heavily appropriated for irrigated agriculture, and ground water was brackish. The Water Development Association of Southern Colorado sold golden frying pans up and down the valley to promote the Fryingpan-Arkansas Project, which held the promise of bringing a supplemental supply of water for both irrigation and domestic use.

The Southeastern Colorado Water Conservancy District was formed in Pueblo District Court in 1958 as the local sponsor of the Fry-Ark Project. The District includes parts of nine counties, including the six which are part of the AVC.

The AVC was authorized in the original Fry-Ark Project legislation in 1962 (Public Law 87-590). The AVC would not increase Fry-Ark Project water diversions from the western slope of Colorado; rather, it was intended to improve drinking water quality.

The AVC was not constructed with the original Fry-Ark Project primarily because of the beneficiaries’ inability to repay 100 percent of construction costs as identified to be required in the Public Law 87-590. In 2009, Congress amended the original Fry-Ark Project legislation in Public Law 111-11, which authorized annual federal funding, as necessary, for constructing the AVC, and provided that 35 percent of total Project construction costs would be repaid by local Project beneficiaries over a period of no more than 50 years.

The Bureau of Reclamation’s Technical Service Center (TSC) in Denver compared five pipeline alignments in 2012 for construction of the AVC. A supplemental report was issued in June 2013 for one additional alterative, for a total of six alternatives. A Final Environmental Impact Statement (EIS) was issued in August 2013. Seven alternatives (six action alternatives from the Appraisal Design Report plus no action) were analyzed under the Final EIS. A Record of Decision (ROD) was signed by Reclamation’s Great Plains (now known as Missouri Basin) Regional Director in February 2014 which selected the “Comanche North Alterative” for implementation.

Through a collaborative effort between Reclamation and the Southeastern Colorado Water Conservancy District in 2018 and 2019, a revised Project configuration was developed with the goal of reducing the Project costs and requirements for Reclamation appropriations. Project estimated costs were reduced to a range of $564 to $610 million, and through alternative funding sources, the estimated requirement for additional Reclamation appropriations was reduced to a range of $355 to $414 million. 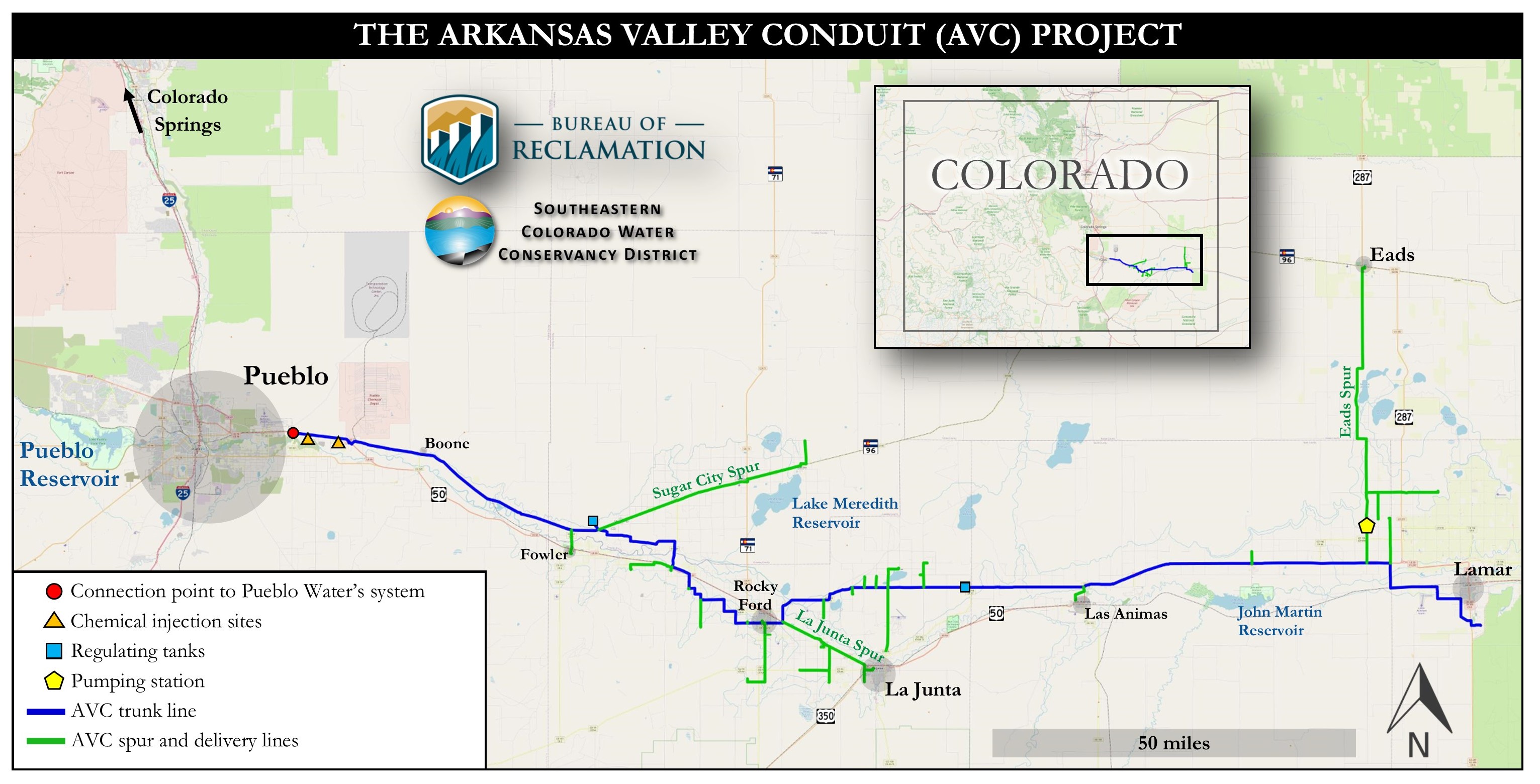