For 90 years, the Reclamation program has been an integral part of southern Idaho. In the 21st century, Reclamation continues to be a driving force behind the southern Idaho economy and a vital contributor to the state's lifestyle. 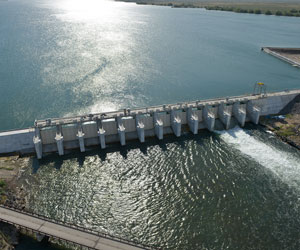 Early settlement of Idaho depended primarily on agriculture, and thus the availability of water. Because of the arid climate in southern Idaho, farming was made possible only by irrigation. As settlement grew farther from main sources of water, farmers joined together to build diversion dams and dig canals that provided water for everyone.

In 1902, Congress established the Reclamation Service to develop water projects that would make settlement of the arid western United States possible.

Many other large and small water projects were constructed by Reclamation in the following decades. These projects provided irrigation water to thousands of acres of Idaho farmland that resulted in a flourishing agricultural economy.

Reclamation irrigation water brought life to such Idaho crops as sweet corn, sugar beets, alfalfa, potatoes, wheat, onions, and apples. There is no doubt that Reclamation's presence has left an indelible and invaluable impression on the state. The development of modern day Idaho was made possible by the state's agricultural productivity.