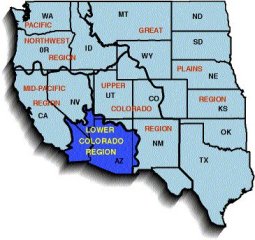 The Lower Colorado Region is one of five administrative areas, established by geographical boundaries, that administer Bureau of Reclamation programs and projects in the 17 Western States. The LC Region was not formally established until 1943, even though Reclamation had started developing projects in Arizona, California and Nevada four decades earlier. The Region encompasses parts of five states that contribute water to or draw water from the Colorado River: southern California; southern Nevada; the southwest corner of Utah; most of Arizona; and part of west-central New Mexico.

Some of Reclamation's earliest and best-known projects - Theodore Roosevelt Dam, Hoover Dam, the All-American Canal, Parker Dam - are found in the LC Region, as are more recent projects such as the Central Arizona Project and the Robert B. Griffith Project (formerly the Southern Nevada Water Project). Many other lesser known but equally successful Reclamation projects can also be found in this Region. Large or not so large, these projects have all contributed significantly to the economic growth and development of Arizona, California and Nevada. And they will continue to be major contributors to the future development and quality of life in these states. 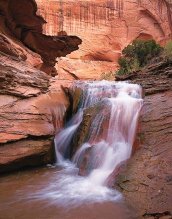 Reclamation's program in the Lower Colorado Region was highly visible throughout most of the 1900s, as we built dams, power plants, canals, and transmission lines to help meet the Southwest's water and power needs. By the mid-1990s, our program focus had shifted more to the less-visible but equally important task of improving management of already-developed water resources. New and changing social needs and priorities were the driving force behind this change. The demand for water in the Southwest is much greater today than it was when Reclamation began its work here in 1903. There is still a large agricultural water demand, of course. But there also is an increasing demand for water to meet the needs of growing communities, Indian tribes, and for recreational and environmental purposes. The challenge today is to help find the water resources to meet these conflicting demands - in partnership with the States, local governments, Indian Tribes, water and power users, environmental organizations, and other Federal agencies.

The Area Offices are located in Phoenix, AZ; Yuma, AZ; Temecula, CA; Boulder City, NV; and at Hoover Dam. These offices work directly with local entities on water and related resource issues within their defined geographic area. The Area Offices and the Regional Office work closely together to ensure Reclamation programs and activities throughout the Lower Colorado Region meet the expectations of our constituents and customers, and are conducted with maximum efficiency, effectiveness, and consistency.

At its inception, the Reclamation program was envisioned primarily as providing water for agriculture. Over time, the program evolved to provide multiple benefits:

In a typical year, Reclamation projects in the LC Region supply water to irrigate more than 1.5 million acres in the United States and Mexico, and to help meet the needs of more than 18 million people in Arizona, Nevada and California communities. In 2003, we delivered, for consumptive use, about 2.8 million acre-feet of Colorado River water to Arizona, 4.4 MAF to California, and 299,000 acre-feet to Nevada. In addition, 1.6 MAF was scheduled for delivery to Mexico.

Hydroelectric powerplants at Hoover, Davis and Parker Dams generate, on average, about 6 billion kilowatt hours of electricity a year - enough to meet the needs of 2 million people, and the energy equivalent of more than 11.4 million barrels of crude oil. Reclamation also has rights to about 25 percent of the output of the Navajo Generating Station, located near Page, Ariz. This power is used to pump Colorado River water through the Central Arizona Project to water users in central and southern Arizona. Reclamation also constructed the hydroelectric powerplants at Roosevelt Dam, Headgate Rock Dam and New Waddell Dam, which benefit the Salt River Project, Colorado River Indian Tribes and Central Arizona Project, respectively.

Fifteen major recreation areas are located on Reclamation projects in the LC Region. These include Lake Mead National Recreation Area, America's first national recreation site. With the exception of the Hoover Dam visitor center, the recreation areas are managed by other governmental agencies. Together, they are visited by more than 12 million people each year. Hundreds of thousands more enjoy the recreational opportunities provided by the year-round, controlled flow of the lower Colorado River.

Since Hoover Dam was completed in 1935, there has not been a water shortage on the lower Colorado River, although there have been several droughts in the geographic area covered by the Region. The years 2000-2004 are the driest 5-year period in the Colorado River Basin since record-keeping began in 1906; however, the foresight of the planners and engineers who designed the Colorado River water storage system has allowed Reclamation to efficiently manage full water deliveries to users during this long-term drought.

Hoover Dam and Parker Dam are the only facilities on the Colorado River with an authorized flood control function, but all the dams on the river help prevent or minimize flooding. In 2000, Reclamation dams prevented potential flood damages estimated at $1.4 million. Since 1950, the dams have prevented an estimated $1.1 billion in flood damages. (The modification of Roosevelt Dam on the Salt River in Arizona added flood control to that structure's function also.)

Reclamation also developed strategies for improving coordinated management of the reservoirs of the Colorado River system, especially operations of Lake Powell and Lake Mead during drought and low reservoir conditions.

Through these operational guidelines, the Secretary of the Interior is able to better manage and operate the key Colorado River reservoirs while also providing United States Colorado River water users and managers of the Colorado River Basin -- particularly those in the Lower Division states of Arizona, California and Nevada -- a greater degree of certainty with respect to the amount of annual water deliveries in future years, particularly under drought and low reservoir conditions.

In the Lower Colorado Region, Reclamation is accomplishing these tasks through programs focused on meeting water and related resource needs in an economically sound manner that balances environmental protection and needs with sustained economic growth.