The Hoover Dam Police Department has been a part of Hoover Dam from the very beginning of the project in the early 1930s. In addition to managing the formidable technical challenges associated with building this engineering wonder, the Bureau of Reclamation also addressed safety, security and law enforcement issues from the very start of construction.

Because the project was located on lands that were ceded by the State of Nevada to the federal government, maintaining order at the site was a federal responsibility. Initially, this enormous task was assigned to just one man, Claude Williams, a United States Marshal. Williams had oversight of the entire federal reservation, consisting of about 115 square miles, including the dam site, the construction camp, and Boulder City, the permanent community built 7 miles from the dam to house project workers, Six Companies officials, and Reclamation's administrative offices.

In August 1931, just a few months after construction started, a workers strike forced the federal government to address the need for a larger crew to maintain security and protect government property. The U.S. Attorney General authorized Reclamation to deputize 15 to 20 men, with the possibility of expanding the force should an emergency arise. The strike ended quickly -- 5 days after it began -- but the need for an ongoing police presence at the site was recognized. 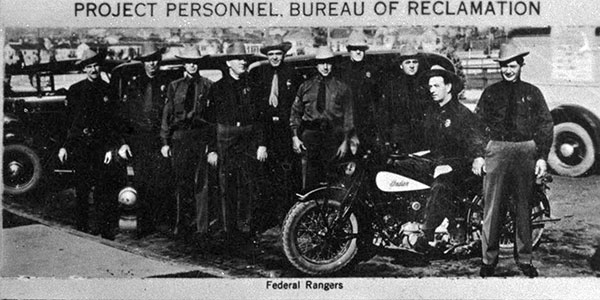 Within a few weeks, Reclamation established a temporary police force of 9 employees, all deputized as U.S. Marshals. Oversight was divided between 2 ex-soldiers with police experience. Bud Bodell was Chief of Police within the Boulder City limits and Claude Williams was Chief Ranger on the rest of the reservation, including the construction areas. Williams was also responsible for the "gateway" at the reservation boundary, just west of the Boulder City limits, where all persons wishing to enter were required to show identification.

As construction of the dam proceeded and thousands of men and their families made their way to Boulder City desperately seeking work, the matter of preserving order became a greater concern. In 1932, Walker Young, the construction engineer for Hoover Dam, and Frank Crowe, general superintendent of Six Companies, Inc. -- the builders of the dam -- expressed the need for an adequate police force at the site. In 1933, a court case between the state of Nevada and Six Companies questioned the extent of the federal government's responsibilities for law enforcement on the reservation. Following this event, the Department of the Interior issued regulations prescribing new limits of authority for policing the Boulder City reservation for the rangers employed by the Bureau of Reclamation.

As construction continued, thousands of visitors from all over the country and world flocked to the barren landscape to view the new engineering wonder and rapidly-filling reservoir, Lake Mead. As a federal engineering agency unaccustomed to hosting tourists, Reclamation teamed up with the National Park Service to address these new demands. In 1936, the two agencies signed an agreement whereby the Park Service agreed to be in charge of developing what was then the world's largest artificial lake for recreational purposes (and what is today, Lake Mead National Recreation Area - the nation's first national recreation area), and Reclamation accepted responsibility for tourist facilities at the dam and powerhouse.

Reclamation established a guide service to tell the story of the dam to the hundreds of tourists coming to the site in those early years. And, since construction of the site was generally complete by 1936 (some work on the powerplant continued into the 1960s), Reclamation focused its safety and security concerns on the dam and powerplant.

But as European conflicts increased in the late 1930s, and as threats to America's national security increased, so did security measures at Hoover Dam and the role of the Hoover Dam Police Department. In 1939, all private boats were banned from Black Canyon (where the dam was constructed), and restrictions were placed on dam employees and visitors. Employees could only enter the dam for their specific duty times, and were not allowed to escort anyone else without specific authorization. Visitors taking tours were under much closer supervision, and no one was permitted to enter the facility with a package larger than a lunch box or small camera except at the discretion of the chief guide. And to enhance these measures, Reclamation increased its ranger force by several men.

Following the attack on Pearl Harbor in 1941, security was again reinforced at Hoover. As a major supplier of electricity to the U.S. defense industry, the dam was deemed to be a prime military target. Several concrete and steel bunkers, camoflagued in a veneer of local rock, were quickly built overlooking the dam. Soldiers manned these bunkers (known as "pillboxes") and a squad of riflemen was perched in the canyon walls 24 hours a day. Civilian vehicles were also escorted across the dam by the military, and additional lighting, gates, barriers, doors, alarm systems, and fencing were installed throughout the site.

Today, only one of the pillboxes remains, but the security and safety of Hoover Dam and its employees and visitors continues to be paramount. Events over past decades have required security measures to again be reinforced, and the Hoover Dam Police Department has enhanced its officers' expertise and specialized skills, and its technical surveillance capabilities, to meet the new law enforcement challenges at the site. The Department also partners, as needed, with private security contractors, the National Park Service and local law enforcement in Arizona and Nevada to meet the increased demands for overall physical security and emergency response at the dam.

The dam -- an engineering wonder and national icon -- is essential to life in the American Southwest. The water from its reservoir irrigates more than a million acres of land in the U.S. and Mexico, and supplies more than 20 million people in 3 states. Additionally, the dam produces more than 4 billion kilowatt-hours of electricity a year, and provides safe transit for more than 14,000 vehicles each day.

The Hoover Dam Police Department is proud to maintain the legacy of providing for the safety and security of this engineering wonder -- and those who visit and work in it -- each and every day. 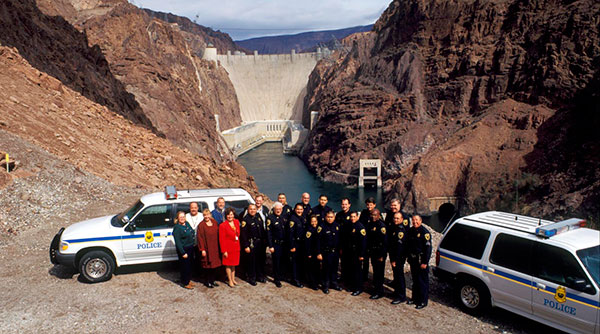