The mission is to pursue research into supply-enhancing technologies for brackish groundwater. There are five areas of focus at the Brackish Groundwater National Desalination Research Facility. They are:

Solutions to Concentrate Management
Research will focus on developing innovative methods for reducing the volume of concentrate that is removed from desalinated water--thereby increasing the amount of usable water produced. The research will also address developing environmentally sound processes for disposing of concentrates and will investigate beneficial uses of concentrate as well as byproducts that can be produced from concentrate.

Renewable Energy/Desalination Hybrids
Projects will research the development of cost-effective hybrid units that combine processes utilizing wind or solar energy with desalination technologies. It will also investigate alternative energy sources that have potential to reduce the costs of desalination including: fuel cells, geothermal, microwave and others.

Desalination Technologies for Produced Waters
The development of technologies that will reduce the environmental impacts and withstand the aggressive nature of water produced in conjunction with oil and gas production wells will be studied. The Research Facility has dedicated water storage and distribution lines that can accommodate these waters.

Small-Scale Desalination Systems
Small-scale stand-alone desalination units that can operate effectively off grid, generally through renewable energy sources may provide solutions to remote areas. Research will also study small-scale units that are inexpensive to purchase and operate and that can be operated with minimal maintenance. As a final step, monitoring techniques that can signal when small-scale units require maintenance to ensure that units located in the field are working properly will be developed.

Outreach and Education
Workshops, public displays and presentations in the building and at organized environmentally focused events will be used to provide experiences and opportunities to share knowledge. the goals of public outreach and education efforts are to increase interest in the field of water science and engineering, dispel myths about water, and promote understanding of the issues surrounding the decisions we all make in chosing where to obtain water and how we treat it on a personal level as well as the community and national level.

The Research Facility is integrated into Reclamation's existing desalination research and development program. It fills a unique role and draws upon the expertise and research activities already established. 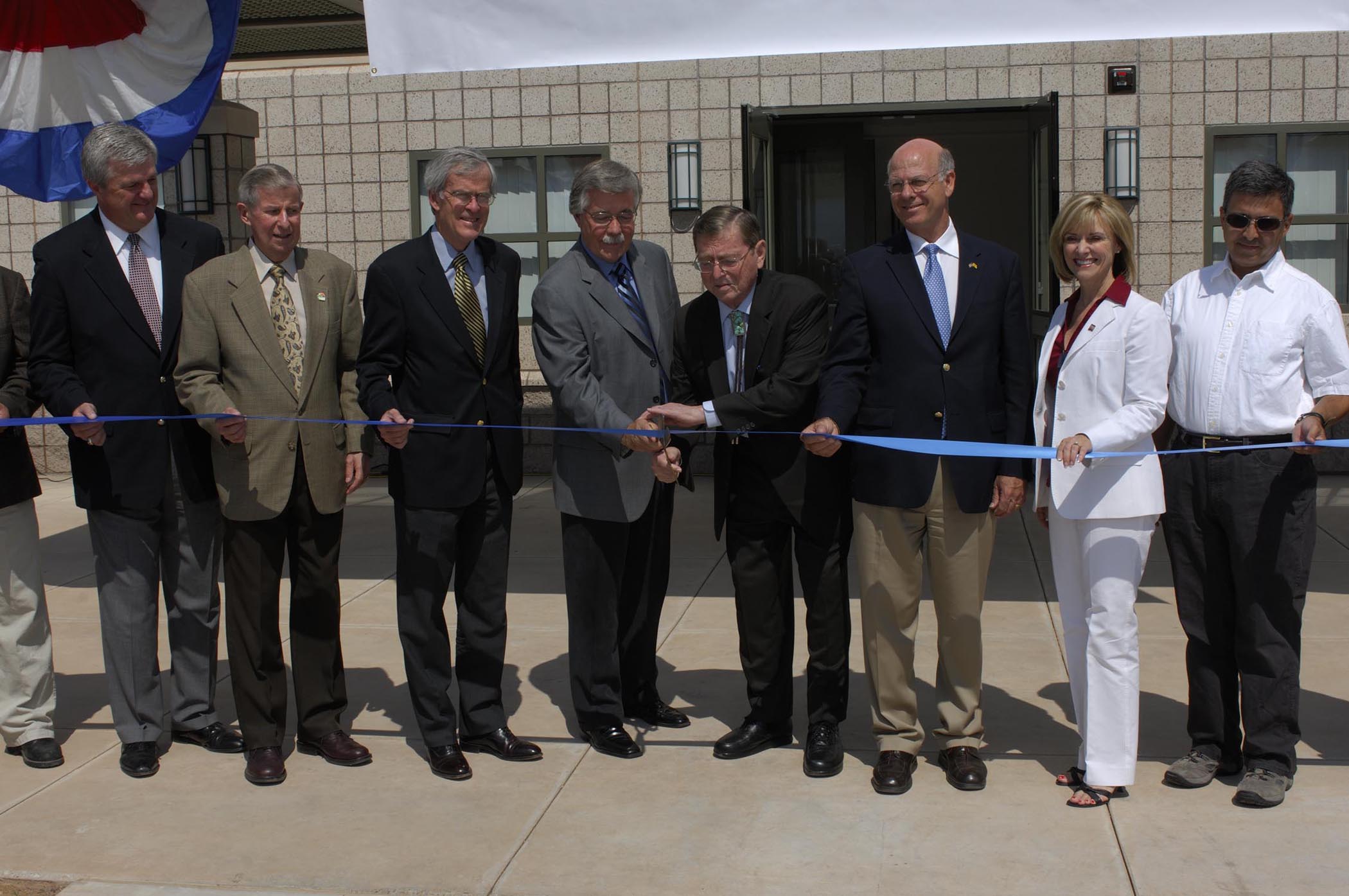 The movement to create a desalination research facility to address the need to lower costs of brackish water treatment, to improve performance and to manage the concentrates removed from the water began in 2001 when Congress, through the Desalination Act, directed Reclamation, in cooperation with Sandia National Laboratories, to plan for a desalination research and development facility in the Tularosa Basin of New Mexico. Congress subsequently directed Reclamation to design, build, operate and maintain the facility. The facility is called the Brackish Groundwater National Research and Development Facility (BGNDRF). Construction of the facility began in 2004, followed by a ribbon cutting in August 2007, commissioning in 2008 and research starting in 2009.

The Center provides state-of-the-art research facilities for researchers involved in desalination research studies, pilot-scale projects and small demonstration projects. The facility uniquely focuses on brackish groundwater desalination; renewable energy integration; development of systems for rural and Native American communities; concentrate management; and treating water produced from oil and gas production. It is the only major research facility in the United States dedicated solely to the desalination of brackish and impaired groundwaters and is located within an almost ideal environment for desalination research, the Tularosa Basin, which possesses a vast supply of groundwater resources and a range of water qualities.

The Expeditionary Unit Water Purifier, jointly developed by the Office of Naval Research, the Army, the Navy, and Reclamation was the first research project. During shakedown testing in 2005, the EUWP was sent to Biloxi, MS following hurricane Katrina to provide water for the regional hospital. This unit has been used in several projects since. Two pilot plant projects are currently being tested. General Electric is partnered with New Mexico State University (NMSU) using Office of Naval Research funding to study electrodialysis reversal and pulsed electrodialysis for small communities. Veolia Water Solutions and Technologies is partnered with the Center for Inland Desalination Systems at the University of Texas at El Paso and Reclamation on a project that originated with a grant from Reclamation followed by funding from Sandia National Laboratories. The project uses electrodialysis metathesis to increase the amount of water recovered from brackish sources. A number of inquires have been received about testing concepts at the facility, such as treating salt tolerant turfs with concentrate water in the agricultural part of the facility and enhanced evaporation technology using the facility’s evaporation ponds.

An important part of managing the BGNDRF is setting research priorities through expert workshops, conferences, and targeted research funding:

Reclamation has initiated discussions with a number of organizations concerning the creation of a Brackish Desalination Innovation Cluster focused around the Tularosa Basin. The cluster will be a group of organizations linked by common needs to apply innovative solutions to increase water supplies through treatment of brackish groundwater. The cluster concept will speed the development of synergies needed for a sustained effort.