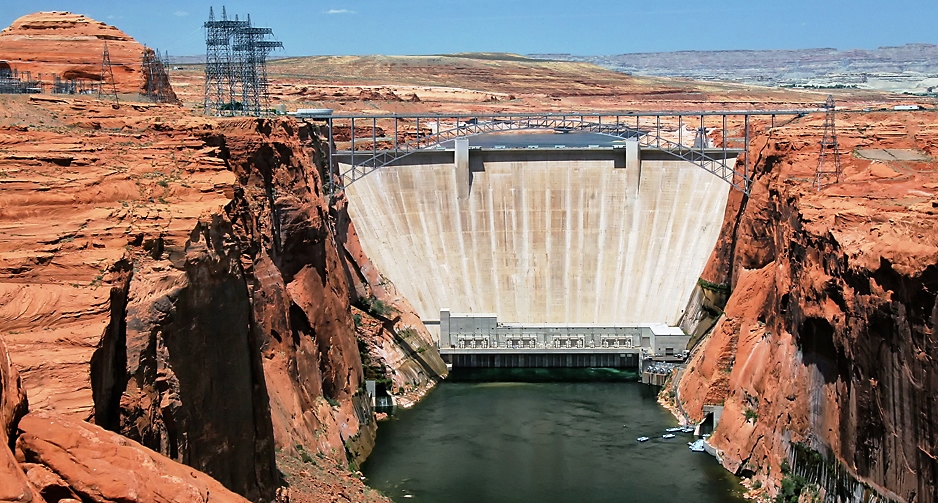 The reduction of releases from Lake Powell from 7.48 maf to 7.00 maf in water year 2022 will result in a reduced release volume of 0.480 maf that normally would have been released from Glen Canyon Dam to Lake Mead as part of the 7.48 maf annual release volume, consistent with operations under the 2007 Interim Guidelines. The reduction of releases from Glen Canyon Dam in water year 2022 (resulting in increased storage in Lake Powell) will not affect future operating determinations and will be accounted for “as if” this volume of water had been delivered to Lake Mead. The August 2022 24-Month Study modeled 2023 and 2024 operations at Lakes Powell and Mead as if the 0.480 maf had been delivered to Lake Mead for operating tier/condition purposes both for the U.S. Lower Basin and for Mexico. The elevations listed in the August 2022 24-Month Study report reflected the projected physical elevations at each reservoir after implementing operations as described for water year 2023 tier determination purposes.

Using the approach described in the immediately preceding paragraph, the August 2022 24-Month Study projected the January 1, 2023, Lake Powell elevation to be less than 3,525 feet. Consistent with Section 6.D.1 of the Interim Guidelines, Lake Powell’s operations in water year 2023 are governed by the Lower Elevation Balancing Tier (LEBT) with an initial projected water year release volume of 7.00 maf. Because the 2022 operations were designed to protect critical elevations at Lake Powell, Reclamation will implement Lower Elevation Balancing Tier operations in a way that continues to protect these critical elevations, or preserves the benefits of the 2022 operations to protect Lake Powell, in water year 2023. Specifically, Reclamation modeled operations in WY 2023 as follows in the August and September 24-Month Studies:

In accordance with the May 3rd Letter, consistent with the provisions of the 2007 Interim Guidelines, and to preserve the benefits to Glen Canyon Dam facilities from 2022 Operations into 2023 and 2024, Reclamation will consult with the Basin States on monthly and annual operations. Reclamation will also ensure all appropriate consultation with Basin Tribes, the Republic of Mexico, other federal agencies, water users and non-governmental organizations with respect to implementation of these monthly and annual operations.

Reclamation will continue to carefully monitor hydrologic and operational conditions and assess the need for additional responsive actions and/or changes to operations. Reclamation will continue to consult with the Basin States, Basin Tribes, the Republic of Mexico and other partners on Colorado River operations to consider and determine whether additional measures should be taken to further enhance the preservation of these benefits, as well as recovery protocols, including those of future protective measures for both Lakes Powell and Mead. For additional information, the news release can be found here: https://www.usbr.gov/newsroom/news-release/4294

The Bureau of Reclamation announced on May 3, 2022, two separate urgent drought response actions that will help prop up Lake Powell by nearly 1 million acre-feet (maf) of water over the next 12 months (May 2022 through April 2023). To protect Lake Powell, more water will flow into the lake from upstream reservoirs and less water will be released downstream:

The plan can be found at the following website: https://www.usbr.gov/dcp/droa.html.

The unregulated inflow volume to Lake Powell during October was 437 thousand acre-feet (kaf) (97 percent of average). The release volume from Glen Canyon Dam in October was 480 kaf. The end of October elevation and storage of Lake Powell were 3,529.92 feet (170 feet from full pool) and 5.83 million acre-feet (maf) (25 percent of live capacity), respectively.

In addition to daily scheduled fluctuations for power generation, the instantaneous releases from Glen Canyon Dam may also fluctuate to provide 40 megawatts (MW) of system regulation. These instantaneous release adjustments stabilize the electrical generation and transmission system and translate to a range of about 1,300 cfs above or below the hourly scheduled release rate. Under system normal conditions, fluctuations for regulation are typically short lived and generally balance out over the hour with minimal or no noticeable impacts on downstream river flow conditions.

The DROA coordination will continue until either (i) the minimum probable projected elevation remains above 3,525 feet for 24 months or (ii) the process moves to the next step when the most probable projected elevation indicates Powell elevations below 3,525 feet and a Drought Response Operations Plan is developed. This 2022 Plan is described above and available for review here: https://www.usbr.gov/dcp/droa.html.

Based on the current forecast of 8.0 maf unregulated inflow for water year 2023, the November 24-Month Study projects Lake Powell elevation will end water year 2023 near 3534.96 feet with approximately 6.14 maf in storage (26 percent of capacity). Note that projections of elevation and storage for water year 2023 have significant uncertainty at this point in the season. Projections of end of water year 2023 elevation using the minimum inflow forecast results from the November 2022 model run for the minimum and the October maximum inflow forecast are 3,499.81 feet and 3,583.27 feet, respectively. The annual release volume from Lake Powell during water year 2023 will be 7.00 maf under the Lower Elevation Balancing Tier and will balance the contents between Powell and Mead with annual release volumes from Glen Canyon Dam between 7.00 maf and 9.50 maf as determined under Section 6.D.1 and 7.D of the Interim Guidelines as determined by the Department of the Interior as described above.

Please contact the Operations Group via e-mail at ResourceMgr@usbr.gov for additional information.