The Colorado River is a critical resource in the West because seven basin states – Arizona, California, Colorado, Nevada, New Mexico, Utah, and Wyoming – depend on it for water supply, hydropower production, recreation, fish and wildlife habitat, and other benefits.

Final Report of the Review of the 2007 Interim Guidelines (7.D. Review)

Reclamation released the Final Report of the 7.D. Review on December 18, 2020.

Through the 7.D. Review, Reclamation intended to bring partners, stakeholders, and the public to a common understanding of past operations under the 2007 Interim Guidelines and their effectiveness. The goals of the Review were to: evaluate the effectiveness of the Guidelines and document Reclamation's operational experience since the Guidelines were adopted. The 7.D. Review Report will be one of many references and sources of input considered when work begins to determine Lake Powell and Mead operations after 2026.

The Final Report is available here:

In May 2005, the Secretary of the Interior directed Reclamation to develop additional strategies for improving coordinated management of the reservoirs of the Colorado River system. In response, Reclamation initiated a public process to develop and adopt interim operational guidelines to address the operations of Lake Powell and Lake Mead during drought and low reservoir conditions.

On Dec 13, 2007 the Secretary signed a historic decision that implements innovative strategies for Colorado River management, charting a water management course for the future. Since 2008, Lake Powell and Lake Mead have been operated in accordance with the Record of Decision for the Colorado River Interim Guidelines for Lower Basin Shortages and the Coordinated Operations for Lake Powell and Lake Mead Link is to a PDF file. The 2007 Interim Guidelines will remain in effect through December 31, 2025 – the 2026 Annual Operating Plan.

The 2007 Interim Guidelines Record of Decision (Section XI.G.7.D.) directs the Secretary of the Interior to initiate a review of the effectiveness of the Guidelines by December 31, 2020 as a necessary step towards negotiating post-2026 operations. In December 2019, Secretary Bernhardt announced that Reclamation would be starting this "7.D. Review" in early 2020, with an anticipated completion in December 2020.

"Beginning no later than December 31, 2020, the Secretary shall initiate a formal review [Review] for purposes of evaluating the effectiveness of these [2007 Interim] Guidelines."

In December 2019, Secretary Bernhardt announced that Reclamation would be starting this "7.D. Review" in early 2020, with an anticipated completion in December 2020. Acting on behalf of the Secretary of the Interior, Reclamation conducted the Review of the 2007 Interim Guidelines and released a Final Report Link is to a PDF file on December 18, 2020.

Underscoring the importance of inclusivity, Secretary Bernhardt began the Review process by emphasizing that

"the report will be a Reclamation product but it will rely on important input from the Basin States, Tribes, NGOs and the public, as the report is developed."

Throughout 2020, Reclamation hosted many virtual meetings with Basin partners and stakeholders to discuss the scope and approach of the Review and the 7.D. Review Draft Report. Partners and stakeholders provided valuable input reflecting a wide range of perspectives. Reclamation incorporated comments on the Review process and Draft Report to the extent possible. Additional information on the Review process, including written comments received, can be found in the Draft Review section.

In initiating the Review, Reclamation hosted two webinars (on March 24 and 31, 2020) inviting participants from the seven Colorado River Basin States, tribes , water districts, conservation and environmental organizations, and others. The webinars included an overview of the proposed scope, approach and schedule for the Review. The presentation from these webinars is available here:

The following entities submitted comments to Reclamation related to the proposed scope and approach for the Review. The comments are available for viewing here:

Reclamation released the 7.D. Review Draft Report on October 23, 2020. Accompanying this release, Reclamation hosted two webinars (on October 23 and 29, 2020) inviting participants from the seven Colorado River Basin States, tribes, water districts, conservation and environmental organizations, and others to describe the content of the Draft Report. The presentation from these webinars is available here:

Reclamation partnered with the University of Arizona, Center for Climate Adaptation Science and Solutions, to pilot new methods for receiving feedback and comments on the Draft Report.

The 7.D. Review largely occurred during the 2020 COVID crisis, and Reclamation's ability to conduct in-person meetings was limited. Reclamation strived to make the 7.D. Review an inclusive process through webinars and multiple separate stakeholder discussions and tested technology designed to facilitate stakeholder engagement and collaboration. On November 19, 2020, Reclamation hosted an on-line (rather than in-person) meeting to offer those interested in the 7.D. Review an opportunity to collectively discuss comments on the 7.D. Review and the Draft Report. Representatives that were previously engaged in the 7.D. Review, including representatives from the Basin States and key water districts, tribes, NGOs, universities and other federal agencies, were invited to participate. The on-line meeting was designed as a unique opportunity for Reclamation to garner further stakeholder input in a manner that allowed all of the participants to hear each other's comments (and if desired, provide feedback). Additional information on the meeting is available here.

Development of the 2007 Interim Guidelines

Spurred by the ongoing multi-year drought, decreasing system storage, and growing demands for Colorado River water, in May 2005, the Secretary directed Reclamation to develop additional strategies for improving coordinated management of the reservoirs of the Colorado River system.

Each year, the Secretary is required to declare the Colorado River water supply availability conditions for the Lower Division states (Arizona, California, and Nevada) in terms of Normal, Surplus, or Shortage. In 2005, regulations and operations criteria had been developed for Normal and Surplus conditions, but detailed guidelines for a water supply shortage had not been established. It was anticipated that, among other elements, these additional strategies would identify those circumstances under which the Secretary would reduce annual water deliveries from Lake Mead such that use of mainstream water by the Lower Division states is below the 7.5 million acre-feet apportionment (a “Shortage”) pursuant to Article II of the Decree in Arizona v. California Link is to a PDF file.

In response to the Secretary’s direction, Reclamation initiated a National Environmental Policy Act process and preparation of an Environmental Impact Statement to develop and adopt interim operational guidelines to address the operations of Lake Powell and Lake Mead during drought and low reservoir conditions. The proposed Federal Action included four key elements:

Five federal agencies participated in the EIS process as Cooperating Agencies: the Bureau of Indian Affairs, the National Park Service, the U.S. Fish and Wildlife Service, the Western Area Power Administration, and the U.S. Section of the International Boundary and Water Commission. The Cooperating Agencies met regularly with Reclamation, assisted with the development and evaluation of alternatives, and assisted in the preparation of the EIS. Reclamation also coordinated the development of the EIS with the seven Basin States, Indian Tribal Governments, Mexico, other key stakeholders and interested parties, and the public. Meetings with these various groups occurred throughout the process in addition to the multiple public scoping meetings held throughout the Basin.

A Draft EIS was released at the end of February 2007 and a Final EIS was published in November 2007. The outcome of the NEPA process was the 2007 Interim Guidelines. On Dec 13, 2007 the Secretary of the Interior signed the historic decision that implements innovative strategies for Colorado River management, charting a water management course for the future.

Documents related to the development of the 2007 Interim Guidelines are available below. If you cannot find the document in this section, try the LCR Documents Archive.

Operating under the 2007 Interim Guidelines

The 2007 Interim Guidelines are in place from 2008 through December 31, 2025 (through preparation of the 2026 Annual Operating Plan).  Reclamation’s Upper and Lower Colorado Basin Regions manage the operations of Lake Powell and Lake Mead pursuant to the Record of Decision for the 2007 Interim Guidelines Link is to a PDF file. The coordinated operational diagram below outlines the coordinated reservoir operations of both reservoirs at different pool elevations. Several implementing agreements were executed concurrent to the issuance of the 2007 ROD, related to forbearance and the creation and delivery of ICS by Lower Basin contractors, as well as subsequent agreements for System Efficiency ICS projects. 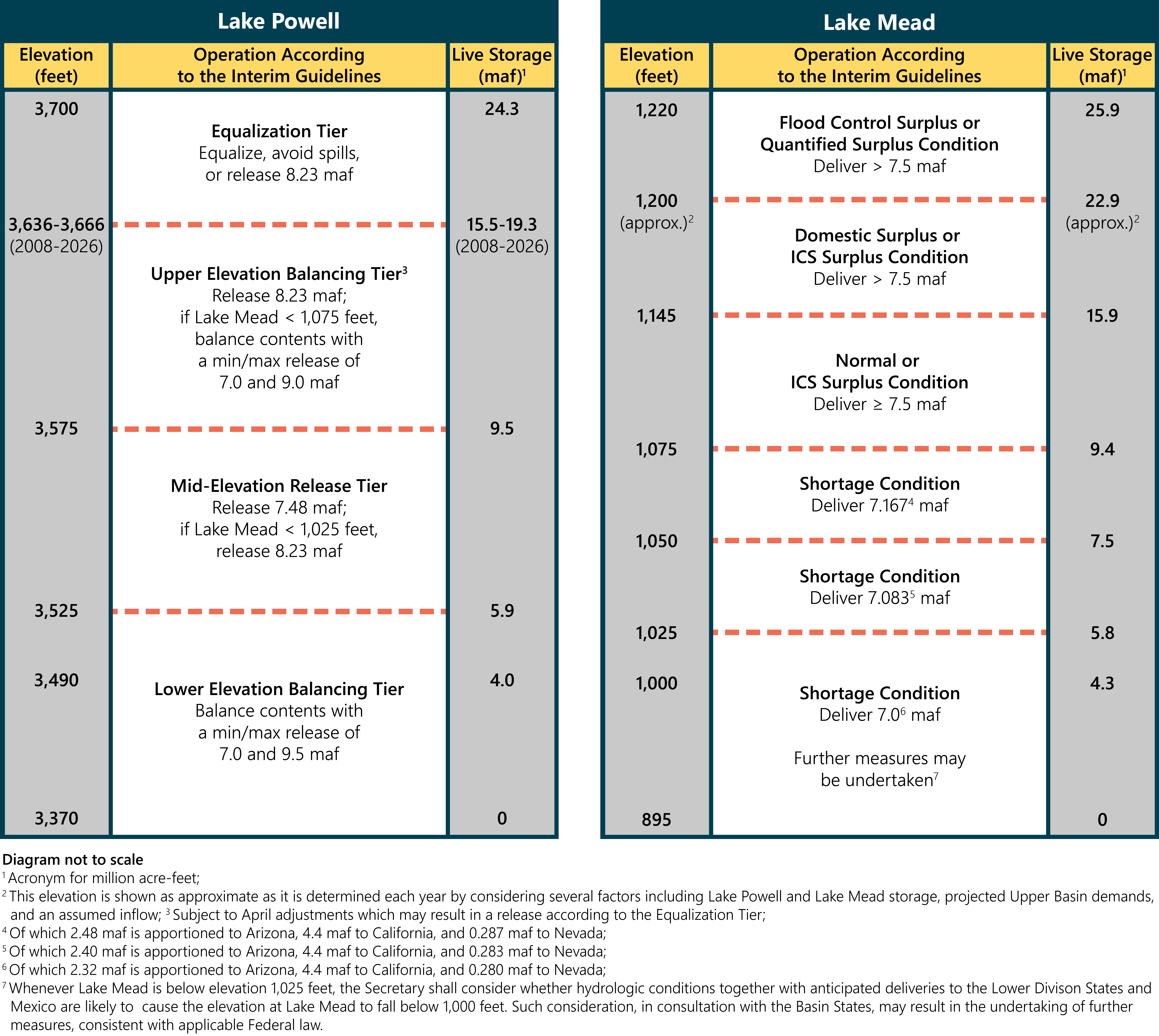 AOPs are prepared in consultation with representatives of the Governors of the seven Colorado River Basin States, Indian Tribes, Upper Colorado River Commission, appropriate Federal agencies, and others interested in Colorado River operations.

Please send any questions or comments about the 7.D. Review, the Draft Report, or the Comment Form via email to 7DReview@usbr.gov.

Please contact the Operations Group via e-mail at ResourceMgr@usbr.gov for additional questions or information.

Please contact the Water Operations Control Center via e-mail at bcoowaterops@usbr.gov or via phone at (702) 293-8373 for additional questions or information.