When a key section of a 72-year-old, 152-mile canal no longer functions optimally, solving the problem requires ingenuity, skill and know-how.

It also means when a problem can’t be fixed by tackling it head-on, go around it.

That is what’s happening at the Friant-Kern Canal, an integral part of the Central Valley Project that delivers water to 1 million acres of highly productive farmland and more than 250,000 people from Fresno to Bakersfield in Central California. 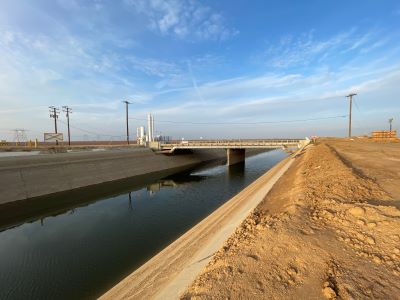 Launched in the years following World War II, the Friant-Kern Canal has been a stable workhorse – moving water from Millerton Lake to irrigate the fertile farmland on the east side of the San Joaquin Valley. However, decades of subsidence have caused the ground to sink, taking with it the canal’s ability to move water through gravity.

The problem has become increasingly worse through the years to the point where 60% of the canal’s conveyance capacity has been lost. The water level often laps the edge of bridge overcrossings. During a recent visit, Reclamation field engineer Scott Wolfert painted an almost summertime recreational picture analogy in describing the Friant-Kern Canal.

The canal “is just a big slide in a park,” he said, except in this case, “it’s got a big belly in the middle of it right now so you can’t get as much water conveyed through … and that’s what we are fixing specifically on this job.”

The answer is a parallel canal – built directly adjacent to the existing canal. Funded partially by the Water Infrastructure Improvements for the Nation Act and the San Joaquin River Restoration Act, the Friant Kern Canal Middle Reach Capacity Correction Project is an audacious undertaking that will have water flowing in the new canal beginning in January 2024. 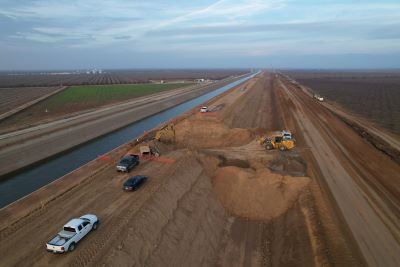 The first phase of the project, more than one-half of which is complete, focuses on a 10-mile section of the canal most affected by subsidence. About 19 of the 31 miles of the overall project include the new parallel canal, with the remainder of the fix done by raising the sides of the existing canal. Siphons – big, concrete box culverts -- are situated throughout the new canal to facilitate the steady, continual flow of water under existing roads and waterways.

While efforts are underway to limit groundwater pumping, subsidence in the area is anticipated to continue for the immediate future.  The Friant Kern Canal Middle Reach Capacity Correction Project accounts for about 5 feet of future subsidence in the project design.

“When we use a siphon that goes under the road, when everything subsides, it subsides right along with it,” Wolfert said. “So, you don’t have the issue of the bridges limiting water height.” 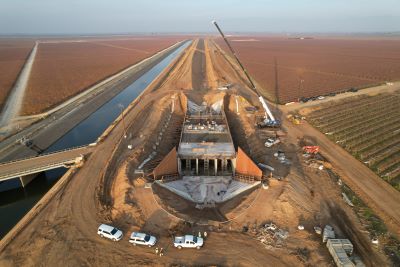 The scale of the work matches the seriousness of the problem it’s solving. When the project is complete, the construction team will have moved about 4 million cubic yards of dirt, which would fill more than 1,200 Olympic-sized swimming pools.

Work on the project began in early 2022, with funds supplied by Reclamation, the state of California and the Friant Water Authority.

Jason Phillips, chief executive officer with the Friant Water Authority, said the project has made “impressive progress” since its January 2022 groundbreaking. “It’s been inspiring to watch and has demonstrated that we can achieve even more,” he said.

Friant Water Authority is investigating the next best section of the canal to fix. Once identified, that project will likely seek to access funds from the Bipartisan Infrastructure Law.

Meanwhile, the fate of the existing canal has yet to be determined once the project is completed. In the immediate future, the plan is to use the canal as a forebay for a new pumping station, Wolfert said.

We are featuring this story through the dynamic ArcGIS format, a vibrant story telling tool that provides vivid imagery and video to enhance the story content. Click here to view the story.