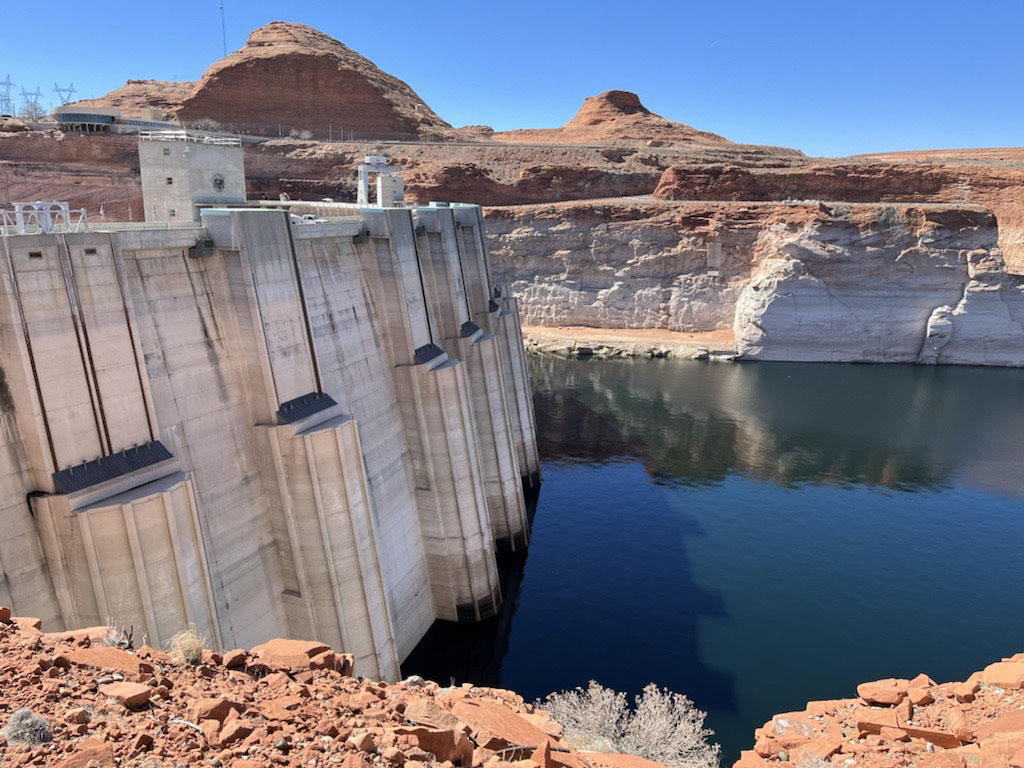 SALT LAKE CITY – The Bureau of Reclamation today announced two separate urgent drought response actions that will help prop up Lake Powell by nearly 1 million acre-feet (maf) of water over the next 12 months (May 2022 through April 2023). Today, Lake Powell’s water surface elevation is at 3,522 feet, its lowest level since originally being filled in the 1960s. A critical elevation at Lake Powell is 3,490 feet, the lowest point at which Glen Canyon Dam can generate hydropower. This elevation introduces new uncertainties for reservoir operations and water deliveries because the facility has never operated under such conditions for an extended period. These two actions equate to approximately 16 feet of elevation increase.

Given the extraordinary circumstances in the Basin, Reclamation is invoking its authority to change annual operations at Glen Canyon Dam for the first time. The measure protects hydropower generation, the facility’s key infrastructure, and the water supply for the city of Page, Arizona, and the LeChee Chapter of the Navajo Nation.

“Today’s decision reflects the truly unprecedented challenges facing the Colorado River Basin and will provide operational certainty for the next year. Everyone who relies on the Colorado River must continue to work together to reduce uses and think of additional proactive measure we can take in the months and years ahead to rebuild our reservoirs,” said Assistant Secretary for Water and Science Tanya Trujillo. “The Department of the Interior remains committed to addressing the challenges of climate change by using science-based, innovative strategies and working cooperatively with all the diverse communities that rely on the Colorado River. Thankfully, we have additional resources now as a result of President Biden’s Bipartisan Infrastructure Law that can aid us in our collective efforts.”

To protect Lake Powell, more water will flow into the lake from upstream reservoirs and less water will be released downstream:

“Reclamation applauds the quick response and support from across the Basin for these actions,” said Reclamation Acting Commissioner David Palumbo. “As we focus on these short-term response actions, we recognize the importance of simultaneously planning for the longer-term to stabilize our reservoirs before we face an even larger crisis.”

Reclamation has previously taken proactive steps based the 2019 Drought Contingency Plan. In 2021, Reclamation released approximately 161 kaf of water from upstream initial units of the Colorado River Storage Project, and earlier this year, Reclamation modified Glen Canyon Dam releases to temporarily hold back 350 kaf of water to slow the reservoir’s decline in the months before spring runoff.

The 2022 Drought Response Operations Agreement (DROA), which is part of the Upper Basin Drought Contingency Plan approved by Reclamation, includes releasing an additional 500 kaf from upstream Flaming Gorge Reservoir. Additional water could also be released from Blue Mesa and Navajo reservoirs through a modified plan if those reservoirs meet their water contract obligations and have water available, which will be determined later this year.

Flaming Gorge Reservoir, located on the Green River in Utah and Wyoming, currently holds approximately 3 maf of water and is at 78% of its storage capacity. Under the 2022 DROA Plan, operators will begin sending additional water to Lake Powell this month. In addition to normal monthly releases, approximately 81 kaf of supplemental water will be released through May; additional supplemental releases will be made in varying levels each month to fulfill the 500 kaf total by the end of April 2023. Flaming Gorge’s contribution of 500 kaf of water is expected to drop the reservoir’s water surface elevation by approximately 9 feet and could impact some of the reservoir’s recreational amenities.

“Under DROA, Reclamation and the Upper Basin States agreed that, when needed, water would be released from upstream reservoirs to maintain water surface elevations at Lake Powell,” said Upper Colorado Regional Director Wayne Pullan. “We made releases last summer from Flaming Gorge and Blue Mesa reservoirs. Now, given the extraordinary circumstances, our release from Flaming Gorge is designed to substantively benefit the continued operation at Lake Powell while having a manageable effect on Flaming Gorge.”

To reduce the amount of water released from Glen Canyon Dam from 7.48 maf to 7.0 maf, Reclamation will keep the 350 kaf of water that was held back earlier this year and will hold back an additional 130 kaf before the end of the water year (September 30, 2022). Reclamation will account for this temporary reduction so that it does not penalize either basin by triggering a new series of required releases or shortage determinations.

“By working together, water users in Arizona, California and Nevada will continue to make all required shortage reductions and water savings contributions in accordance with the basin’s Drought Contingency Plan and 2007 Interim Guidelines,” said Lower Colorado Regional Director Jaci Gould. “But given the impacts of climate change, it’s clear that everyone has to do more to protect our reservoirs – and that means using water with maximum efficiency.”

Water users in the Lower Basin are implementing the shortage provisions in the 2007 Interim Guidelines and the 2019 Drought Contingency Plan and are also creating additional conservation programs, such as efforts designed to conserve an additional 500 kaf in Lake Mead in 2022 and 2023. Complementary actions are also under active consideration with Mexico, pursuant to Minute No. 323 to the 1944 U.S. Mexico Water Treaty.

The 2022 DROA Plan and the Department’s letter finalizing today’s actions can be found on the Reclamation website.