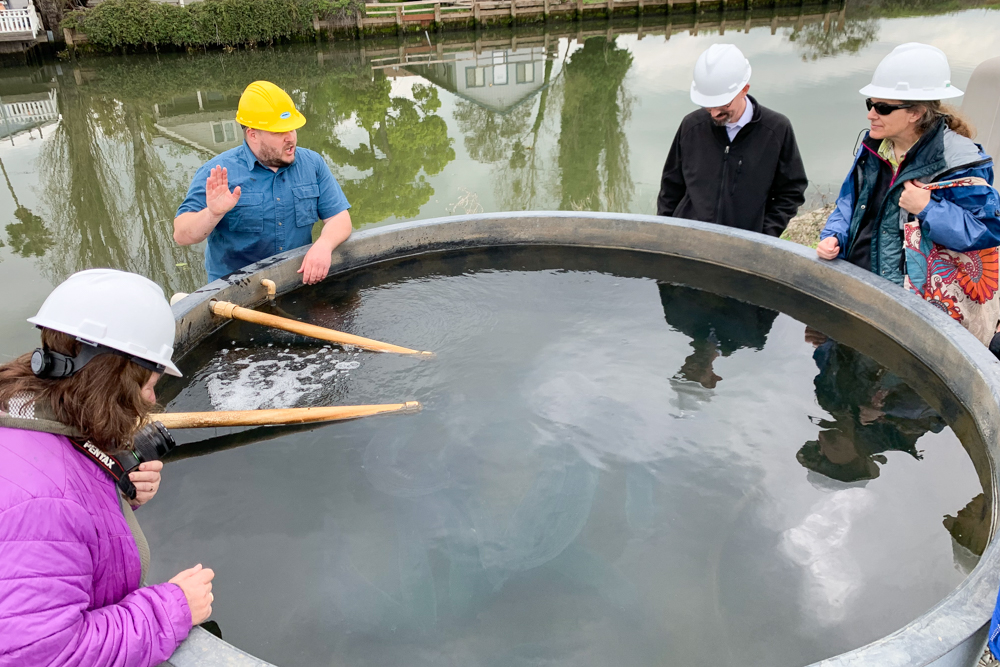 These predatory animals, known as striped bass (Morone saxatilis), will prey on just about anything that crosses their path—including native and threatened fish species like Delta smelt, winter and spring-run Chinook salmon, steelhead trout, and green sturgeon.

They have been stalking San Francisco Bay-Delta waters since the late 1800s but are still considered non-natives. Their predation of native fish species, are blamed by some, to be a contributing factor in determining regulations governing California water operations.

The Delta is the hub of California’s water transportation system, where water arrives from every direction and many sources, like river flows and mountain snowmelt. The Bureau of Reclamation and California's Department of Water Resources have pumping plants located in the south Delta that convey water to the southern part of the state for agricultural, municipal and industrial, and wildlife refuge needs.

This is where Reclamation’s Tracy Fish Collection Facility, in Byron, California, comes into play.

To meet regulatory requirements, the fish facility functions to salvage threatened and endangered fish from water destined for exports by the nearby C.W. “Bill” Jones Pumping Plant. It’s a complex system of channels, louvers, bypasses and holding tanks operated to salvage and protect native fish from the powerful pumps.

Before Reclamation can make its congressionally authorized and contracted deliveries, water is screened at the fish facility, so native and threatened species can be captured and returned to the confluence of the Sacramento and San Joaquin Delta, and away from influence of the pumps.

“The Sacramento and San Joaquin River’s four salmon runs face many challenges on their journey to the ocean, getting preyed upon at our facility is just one of them,” said Rene Reyes, Reclamation’s fish biologist for the facility. “The facility was designed to intercept outmigrating salmon and return them on their journey so we may continue our pumping obligations while minimizing environmental impacts.”

The problem is, striped bass are able to reside within and around the fish facility and prey on native fish species before they can be salvaged.

“Recent research results suggest that predation may be the main source of fish loss at the Tracy Fish Collection Facility. Without addressing this loss, it is likely that Reclamation will be unable to meet facility efficiency requirements set forth by regulatory agencies,” said Brandon Wu, Reclamation biologist.

A group of Reclamation biologists and private entity researchers recently developed a plan to use elevated levels of carbon dioxide to remove predatory fish from the fish facility’s primary channel. Large amounts of CO2, in the form of dry ice, could be placed in front of the fish facility to obtain elevated CO2 concentrations in the water within the facility and guide predatory fish downstream into a holding tank for removal, or guide them into the Delta-Mendota Canal (DMC) where there is no potential impact on salvageable fish.

In an experiment conducted April 2, 2019, roughly 5,000 pounds of dry ice was placed in front of the trash rack at the upstream end of the fish facility. Twelve striped bass were acoustically tagged and monitored during CO2 treatment to determine removal efficiency in holding tanks or the DMC through an open louver panel at the downstream end of the primary channel.

“Striped bass that are removed from the fish facility are transported and released at approved locations where they have minimal impact on future salvage,” Reyes said. “It’s important to point out that we are not in any way trying to harm these fish. We are just attempting to minimize their impact on salvageable fish at the fish facility, including threatened and endangered species.” 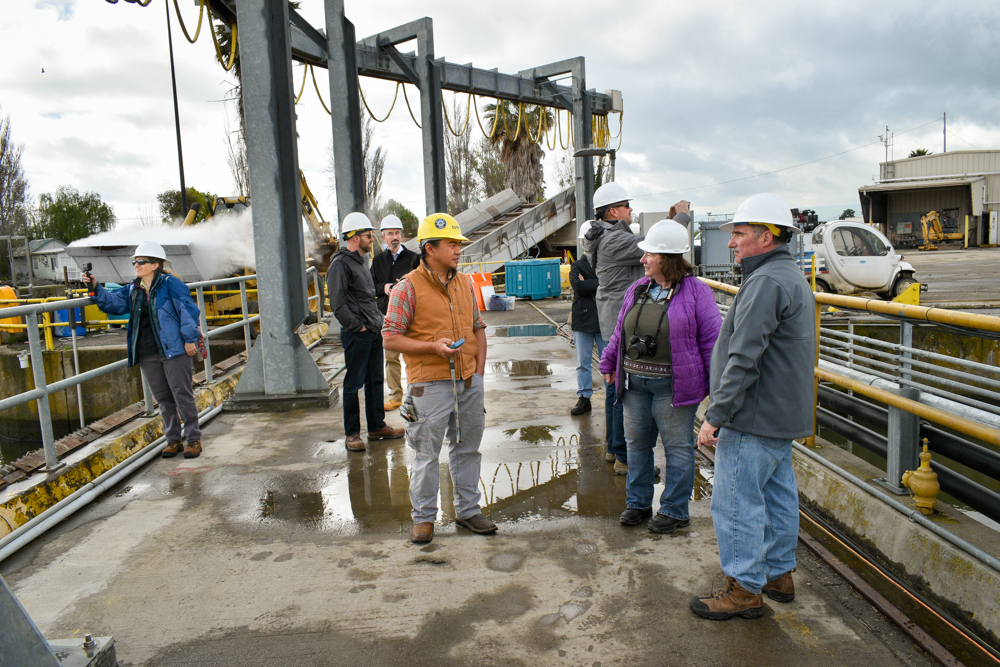 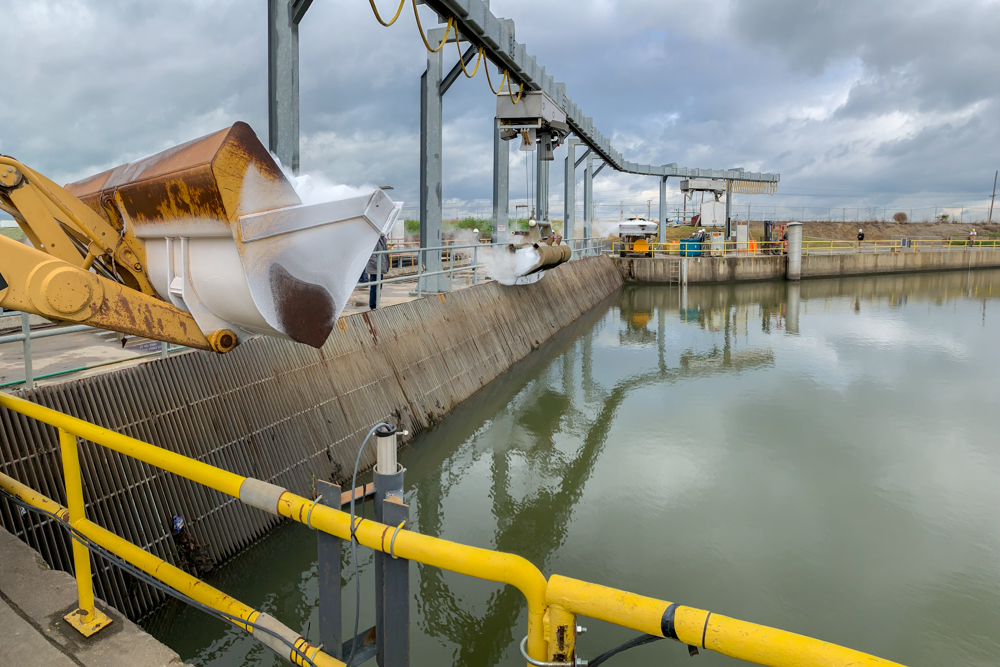 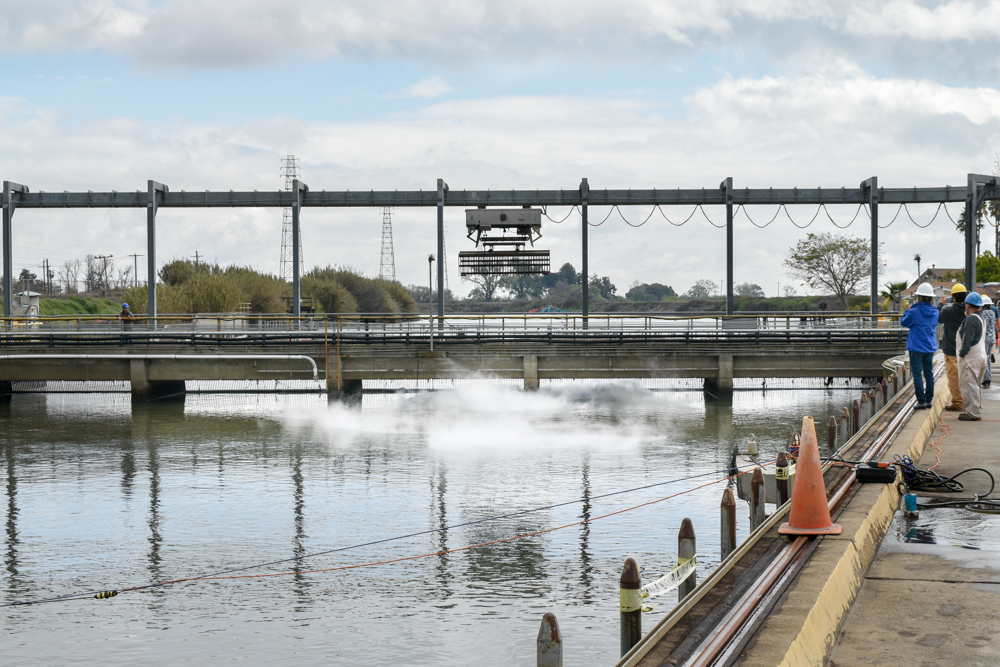 Elevated CO2 concentrations in the water within the facility 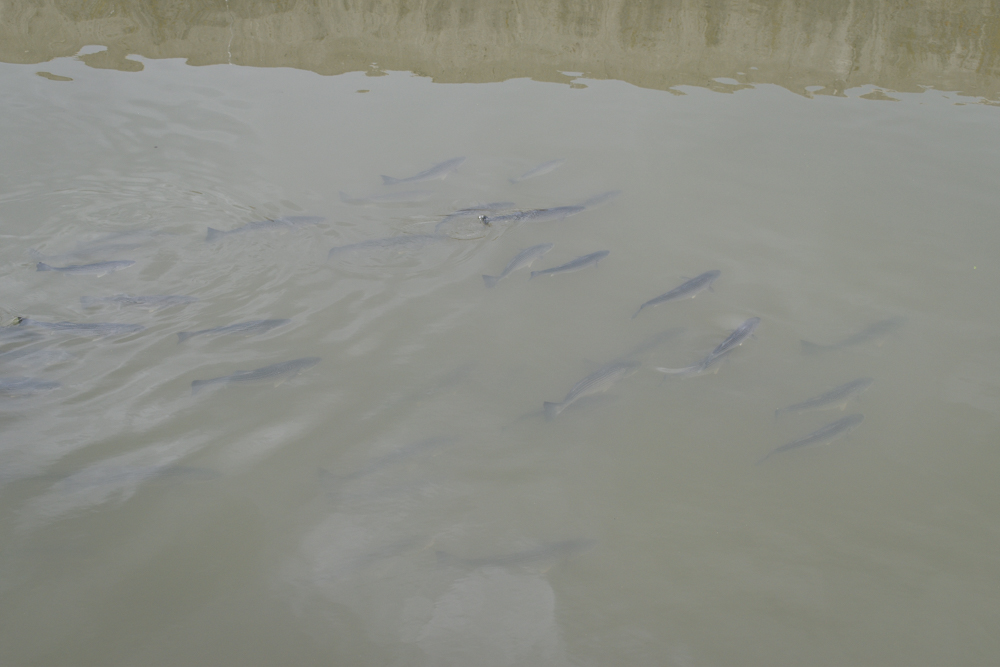 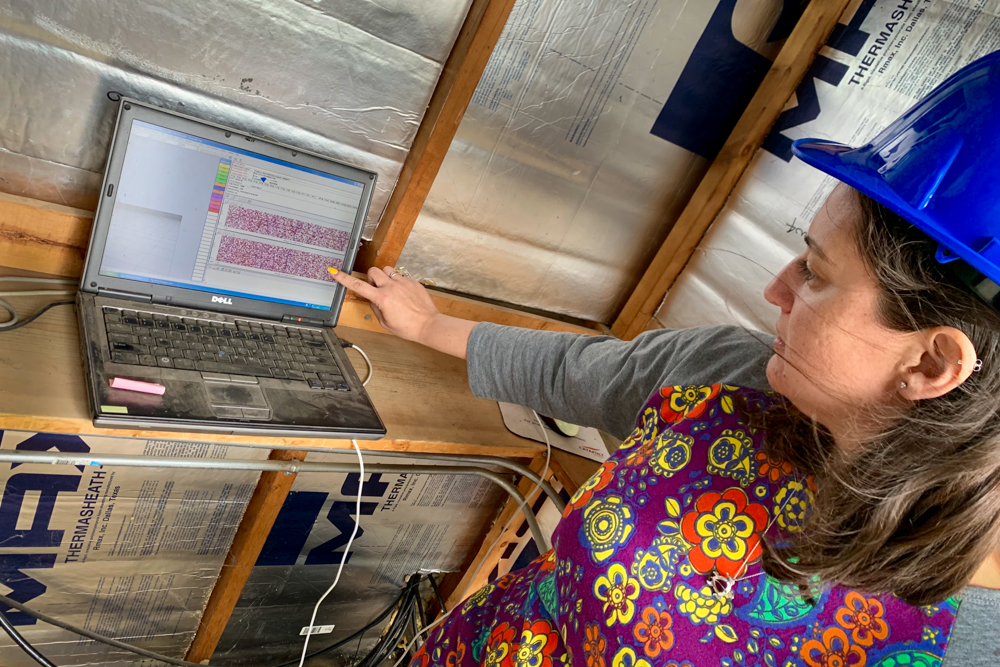 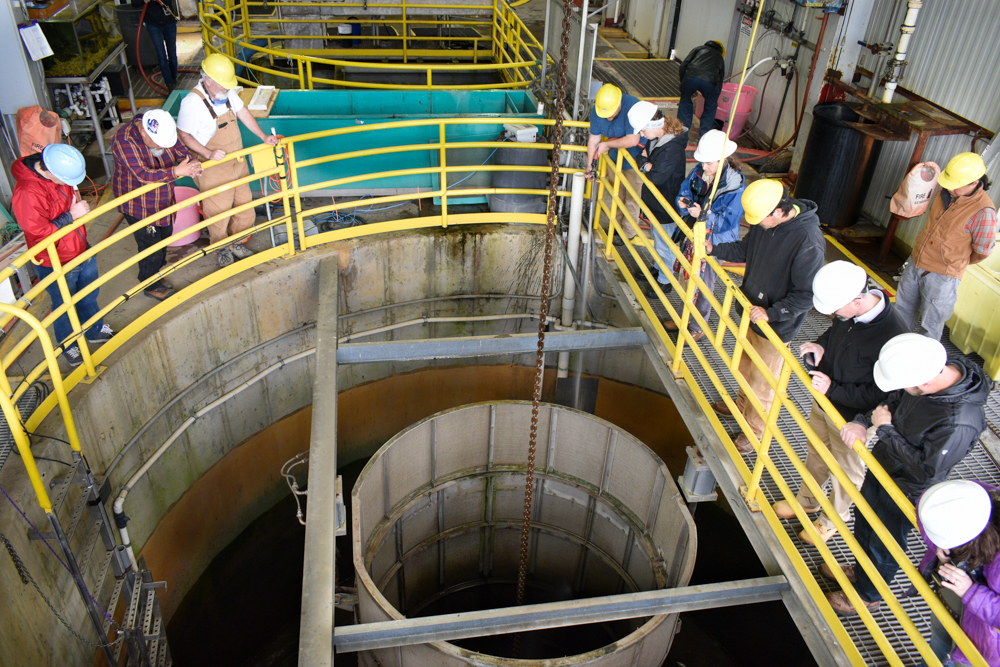 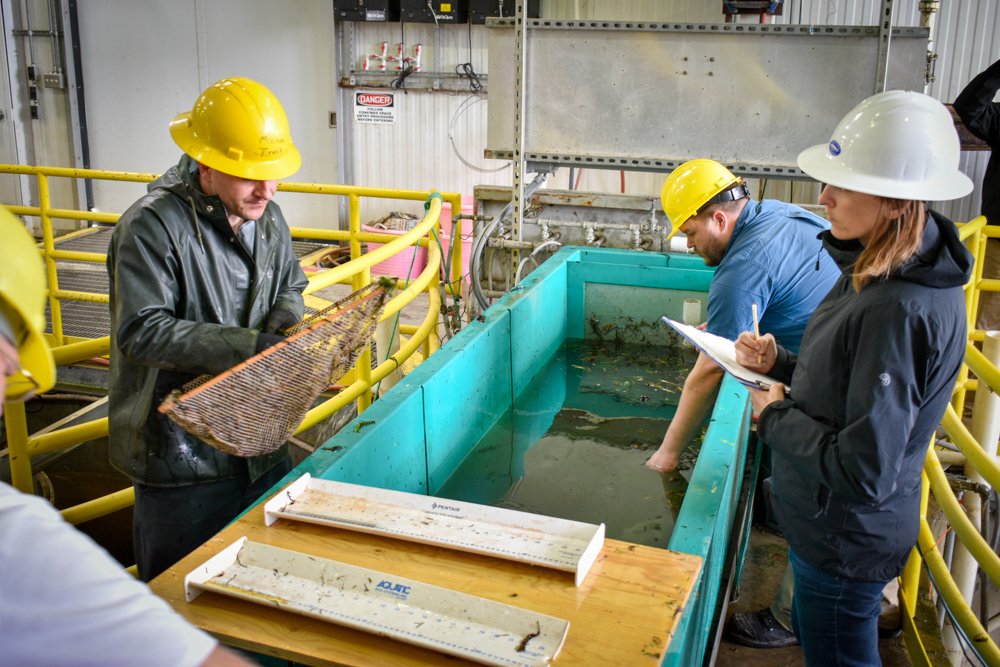 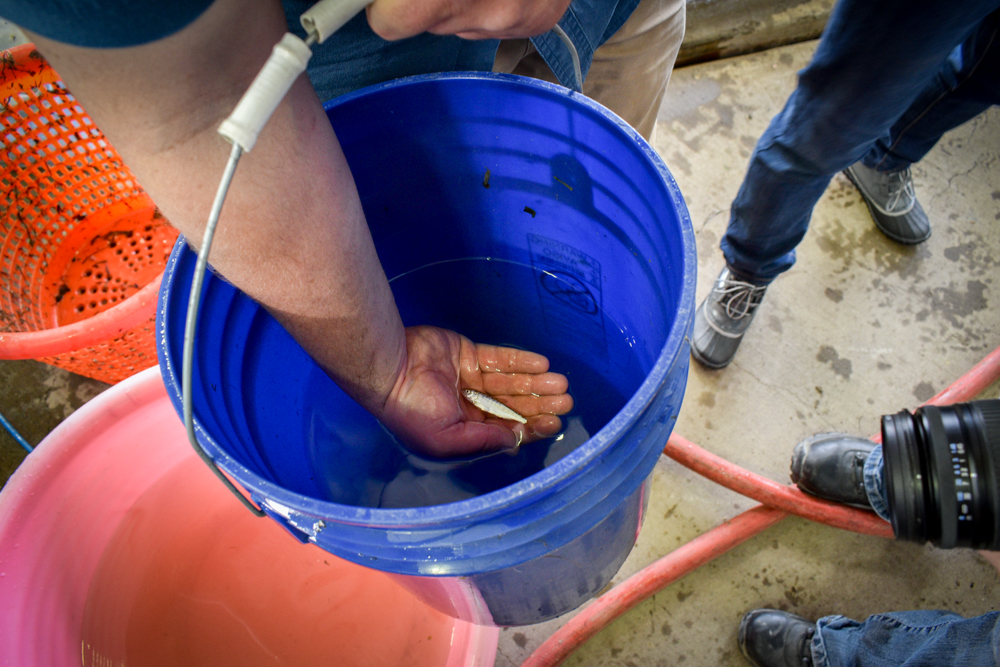