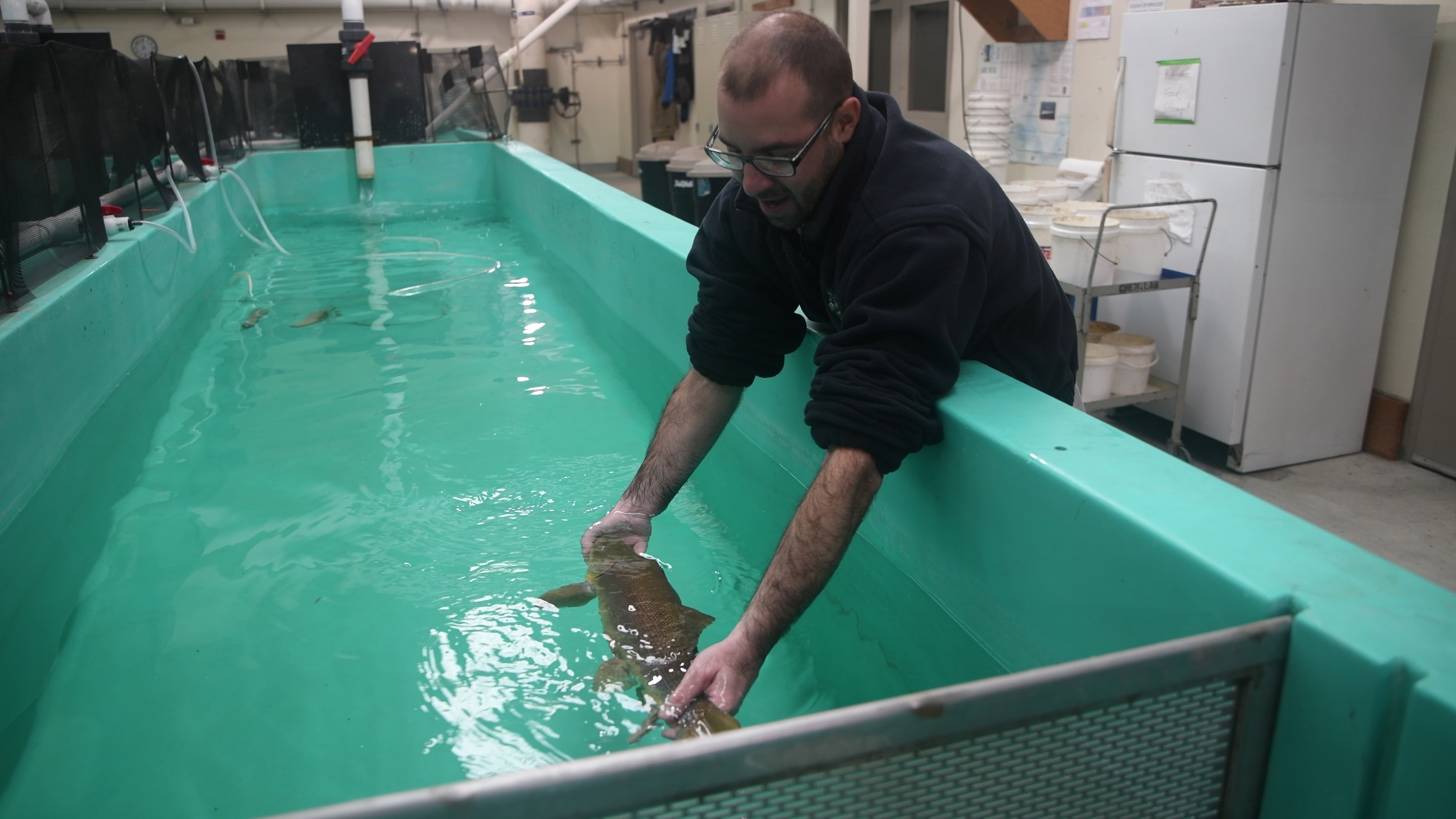 On January 3, fish biologists from the Lower Colorado River Multi-Species Conservation Program (LCR MSCP) trekked over to the facility from their Boulder City office. Joined by their colleagues from BIO-WEST – an endangered species contractor – the NDW team instructed the LCR MSCP biologists on how to collect fin ray samples from adult razorback suckers. Following the instruction, the visiting biologists were then individually charged with performing a fin ray excision of a live hatchery-raised fish.

“All endangered razorback suckers raised at the hatchery are tagged with passive integrated transponder (PIT) tags prior to being released into predetermined habitats along the lower Colorado River,” said Jim Stolberg, Manager of the LCR MSCP Fisheries Group. “These tags can be “read” when the fish swim over submersible antennas that are deployed throughout the lower Colorado River. Observing fish in this manner prevents the fish from being unduly stressed, once released back into the river.”

In conducting growth and survival studies on the razorback suckers, fish biologists gather data on the number of times the fish has been captured, its condition at capture, its age as determined by examining a clipped bone fragment from the pectoral fin, its weight, length, sex, and if eggs are present (female fish).

To accurately assess the age of the hatchery raised razorbacks that are produced at the facility, researchers remove a small section of the fish’s second pectoral fin using chisel clippers. This method poses little health risk to the fish and does not require its sacrifice (compared to other more invasive forms of aging analysis).

The razorback sucker is currently listed as “endangered” under the federal Endangered Species Act. Historically, adult razorback sucker inhabited virtually all components of the Colorado River Basin. In particular, low-velocity areas along the river such as backwaters, sloughs, and other slack water portions of the main channel are primary habitats for them.

The hatchery is housed in a series of temperature-controlled buildings near Lake Mead where the juvenile stages of razorback sucker are brought indoors for protected growth. The hatchery, funded in part by the LCR MSCP through a federal-state grant process, serves as one of the program’s primary repositories for providing adult stage razorback suckers that can be released at pre-determined habitat sites along the lower Colorado River.