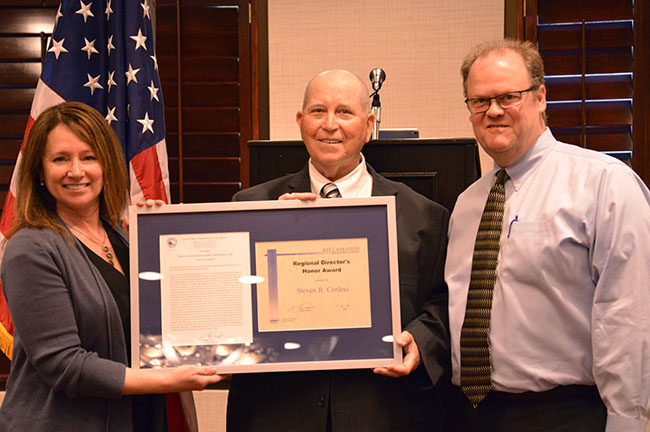 Commissioner Burman, Steve Corless, Regional Director Brent RheesIn recognition of his exceptional service and outstanding contributions and leadership in the area of materials engineering for the Bureau of Reclamation.

Over a 30 year period of sustained excellence, Mr. Corless has distinguished himself as an expert in materials testing both as a technician and, ultimately, as a supervisor. He has gained respect as an authority in the concrete and materials testing industry. Through his efforts he has earned the respect and won the confidence of those in the industry, employees of the Provo Area Office, other Bureau of Reclamation regions, and many other agencies. Mr. Corless is instrumental in ensuring his knowledge is transferred to others and is an excellent mentor to other materials technicians. He maintained a clean and professional laboratory and expected his subordinates to do the same. His materials testing work is characterized by accuracy, attention to detail, and dedication to service and, because of this, the agency ensured its projects meet rigorous materials standards. Over the years, his experience and knowledge has inspired improvements in testing standards and processes. Mr. Corless has contributed greatly to the technical aspects of concrete and materials quality control for Reclamation. His work supports the construction quality control for earth materials and concrete testing for 17 Reclamation projects in Utah, Idaho, and Wyoming including several Safety of Dams investigations and modifications at Fontenelle and Meeks Cabin dams in Wyoming, and Steinaker, Pineview, Echo, Scofield, and Deer Creek dams in Utah; the completion of the Central Utah Project; the Olmsted Flowline Replacement/Rehabilitation Project; Big Sand Wash Reservoir Enlargement Project; and Jordanelle Dam Hydroelectric Power Project. His presence, efforts, and expertise have been fundamental to the construction and rehabilitation of critical public infrastructure. Specifically, his work has contributed to the strength and durability of water and power facilities, reducing operation and maintenance expenses, and securing the safety of the public. For decades to come, fellow citizens will benefit from his years of service. For his significant contributions to Reclamation, the Upper Colorado Region, and the Provo Area Office Mr. Steven Ray Corless is granted the Upper Colorado Regional Director’s Honor Award.