It Takes A Multi-Agency Team

The coordination that is required to obtain the necessary documentation and permitting to clean a stilling basin, as well as finding personnel and equipment to help with the task, can be time consuming. It’s not like grabbing the vacuum cleaner, or in this case a shovel, and digging right in. The effort included Reclamation maintenance personnel, Natural Resource Specialists, Facilities, Equipment & Services Technicians, and Nebraska Game and Parks Commission personnel. Who would have thought that cleaning a stilling basin could take such effort?

I found my first experience cleaning the stilling basin at Medicine Creek dam to be enlightening. The concrete structure is definitely bigger than expected, making climbing the eight-foot tall dentate to access the stilling basin very difficult. Mud stuck to my boots and caused my feet to slip on the cement. Safety training definitely played a vital part in this operation.

I was surprised that the stilling basin contained more than the expected mud, dirt, gravel, and large rocks; but also wood, fishing lines, lures, metal signs, barrels, and other garbage. It never occurred to me that it would be a dumping ground for just about anything. Even with waders, the tripping hazards were everywhere. This is one place where safety was first on everyone’s mind. Lucky for us, the Nebraska-Kansas Area Office’s new Safety & Occupational Health Specialist, Scott Bell, was also on the team.

Following the environmental review and permitting steps, the mission was to find personnel to help with the fish salvage operation. Reclamation Natural Resource Specialists coordinated with Nebraska Game and Parks Commission personnel to see if they were interested in collecting fish from the basin to relocate elsewhere. A plan was made as to which species to recover and a date selected to start the work.

The fish recovery began two days after lowering the water level to a manageable depth. Fish nets were dragged from one end of the basin to the other, commonly referred to as a seine haul. The nets continually snagged on the large rocks and other debris along the bottom, making it a more difficult task. When the nets completed the journey to the other side of the basin, game fish were separated from other fish and placed in Nebraska Game and Parks Commission’s fish tank truck for relocation in the reservoir.

The first pass of the fish net did not collect very many fish, as the water level was around 32-inches deep. The team made an adjustment and added a second net for the remaining trips, which proved to be more effective. By the afternoon, the water level was about 24-inches deep, but the salvage operation remained slow due to the debris and slippery conditions.

The operation provided quite a showing for people passing by at the top of the dam and stilling basin. On occasion, cheers would erupt from the crowd as personnel walked through the basin, covering themselves with mud and water.

More than 700 game fish were saved by the 17 member team which included Reclamation’s Maintenance personnel, Natural Resource Specialists, Facilities, Equipment & Services Technicians, and Nebraska Game and Parks Commission personnel as a result of the 15 seine hauls. The game fish retrieved and relocated included crappies, channel catfish, white bass, wipers, bluegills, blue cats, and flatheads. The largest game fish of the day were more than two dozen flatheads, ranging from 15 to 30 pounds. Some of the flatheads were estimated at 20 years old by a Nebraska Game and Parks Commission Fisheries Biologist. The following day Reclamation maintenance personnel went back to the location and saved more than two dozen more game fish, including flatheads.

The basin, which originally contained roughly 4 million gallons of water was almost pumped out by the third day. Reclamation’s maintenance crew began removing the sediment, rocks, and other debris from the stilling basin using skid loaders, an excavator, and a dump truck. It took the crew three additional days to remove an estimated 300 yards of material (equal to 30 dump trucks full) from the basin.

Additional dewatering and cleaning was completed to facilitate an examination of the structure as  required by Directive and Standards FAC01-07 -Examinations of Normally Inaccessible Features. The basin was inspected and found to be in excellent condition. A task successfully completed in a safe manner by a multi-agency team. 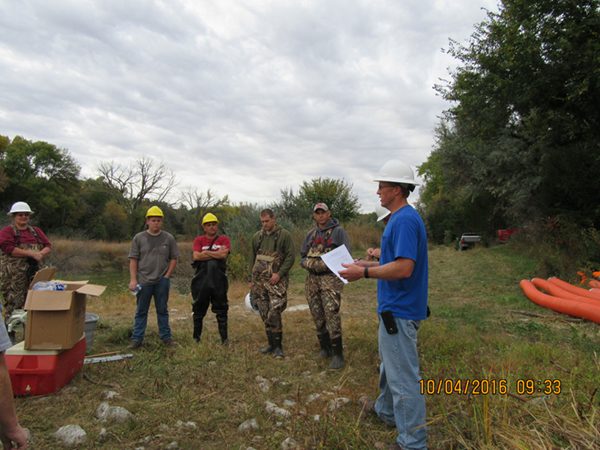 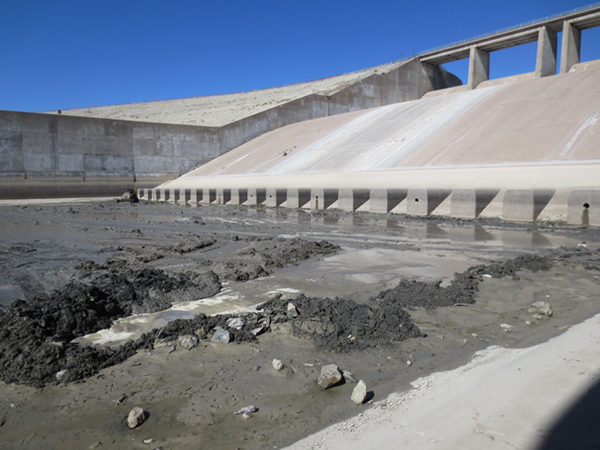 The basin prior to being dug out by NKAO's crew. 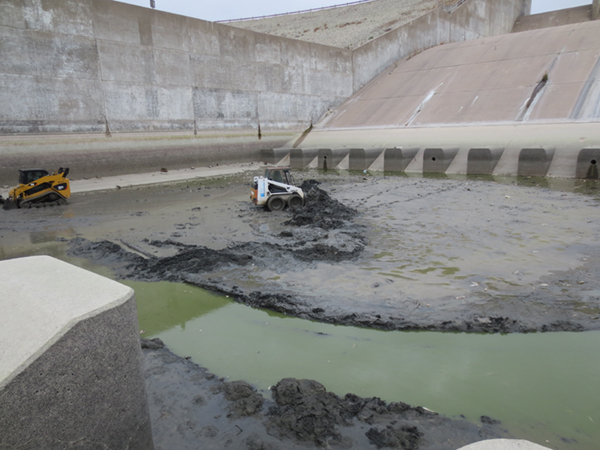 NKAO's crew prepares to dig the basin out. 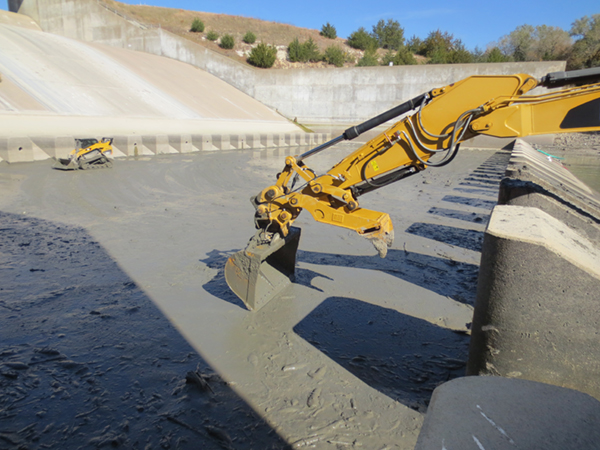 The last of the highly liquefied (i.e. difficult to remove) material being removed. 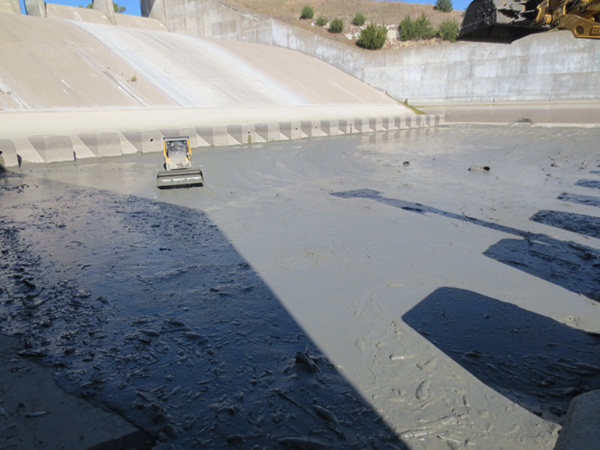 Crews continue removing the highly liquefied material from the basin.