Fossils on Reclamation Lands Provide a Glimpse Into the Past

When two fishermen on Harry Strunk Lake (Medicine Creek Dam) pulled ashore to stretch, in the summer of 2015, they noticed something odd protruding out along the beach at the base of a bluff. They looked at the object, and how it was eroding and realized they had happened upon a fossil. The fishermen realized the potential importance of their discovery and contacted the Nebraska State Museum at the University of Nebraska.

Shane Tucker a Paleontologist with the museum, travelled to Medicine Creek and guided by the discoverers examined their find. They had found the carapace or upper shell of a large land tortoise that lived and died about 6 million years ago along a former river that once ran through Nebraska.

Tucker returned to recover the remains of the extinct land tortoise, August 12, 2016, under an agreement between the Nebraska State Museum and the Bureau of Reclamation in compliance with the Paleontological Resources Protection Act. Tucker was assisted by a throng of more than 20 adults and children who had heard of the project, excavated surrounding sediment exposing the carapace and coating it with a plaster jacket. After drying overnight, the 750 lb. parcel was transported by boat to a dock for its trip to the State Museum for preservation and study.

Fossils like these are the remains, imprints, and traces of once-living organisms preserved in the earth's crust. Fossils are non-renewable and (except for microfossils and those that make up the energy minerals) relatively rare resources with significant scientific, educational, commercial, and recreational values.

Paleontology is the science which uses fossils to study life in past geologic times. Early in its history, the Bureau of Reclamation recognized the importance of fossils. A 1905 circular produced by the agency included the following language, “In constructing irrigation works it is probable that fossiliferous beds will be uncovered, giving exceptionally good opportunities for collecting specimens of value to geologists and paleontologists. Well-preserved imprints of leaves, ferns, or other plant remains, fossil shells, and the bones and teeth of animals are always interesting, and may add much to our knowledge of the geologic history and structure of the region.”

“At Harry Strunk Lake in Nebraska, excavations of archaeological and paleontological remains were initiated in the 1940s when the dam forming the lake was constructed,” said Thompson. “Impressive remains of several Pleistocene species, such as saber-toothed cat and Columbian-mammoth were recovered.”

In the late 1980s, the remains of an 18,500 year old mammoth were discovered eroding out of the reservoir bank. The site contains bone flakes, impact points, and other patterns which would seem to indicate human presence at a very early period. Part of the mammoth was excavated, but more than half was left in place for future research. This was done because research techniques such as DNA identification, methods of determining the age of the deposits, and other forms of microscopic and chemical analysis, are rapidly improving and changing. Future excavations using advanced methods and technology might yield important information that would be lost if the excavations were done today.

At Flaming Gorge Reservoir in northeastern Utah, a number of agencies were involved in recording the footprints of ancient sauropods, long-necked dinosaurs who roamed the area about 180 million years ago. Also found were the much rarer tracks of a pterosaur, a flying reptile that lived between 220 and 65 million years ago. Ongoing research continues to reveal more information about the prehistoric animals. To protect the sites, their locations are not public information at this time.

The public has an opportunity to view fossilized plants and marine animals and even fragments of dinosaur bones in their natural setting at the Cottonwood Creek Dinosaur Trail, located about 25 miles southwest of Casper, Wyoming, at Reclamation's Alcova Reservoir.

The rock formations along the trail include many invertebrate, vertebrate, and plant fossils, indicating a rapidly changing environment of deposition 200-140 million years ago with tidal flats, sand dunes, beaches, oceans, storm deposits, and complex stream and river systems.

In 1991, fossilized skeletal remains of a medium-sized dinosaur (Camarasaurus) were discovered at the site. In 1993, fossil remains of a small Ornithopod, nicknamed “Sniffles”, were found. Most of the actual dinosaur bones which have been discovered to date have been removed for preparation and study and now reside at the University of Wyoming in Laramie.

The best remaining examples of dinosaur bones can be seen near the top of Cottonwood Creek Dinosaur Trail, which is approximately 2 miles long and rises nearly 300 feet in elevation. The extreme, unstable slopes and switchbacks contribute to continually changing trail conditions. The trail user should be in good physical condition and exercise caution. Due to the rugged terrain, the trail is not accessible to the mobility impaired, although interpretive signs located at the trailhead are accessible. Estimated time to complete the self-guided tour along the trail is 2-3 hours. Collection of fossils by the public is prohibited along the trail.

Paleontological resources are protected by the Paleontological Resources Preservation Act and Federal rules and regulations. No one may collect fossils on Reclamation land other than casual collecting of a reasonable amount of common invertebrate or plant specimens for non-commercial personal use. Collection Permits are issued only for scientific research and education. Permits may be issued to institutions with quali­fied personnel and approved repository facilities. All collected items remain the property of the Federal Government. 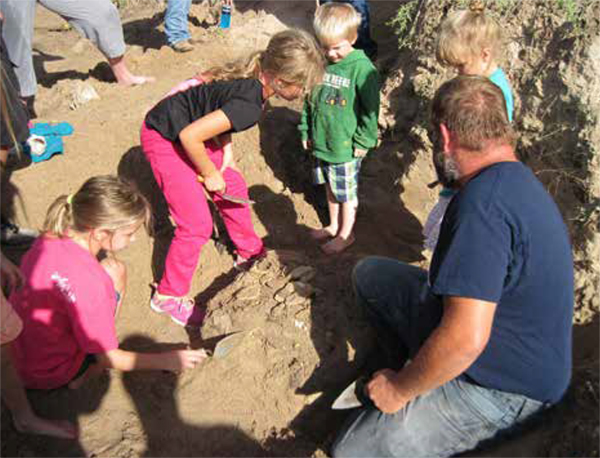 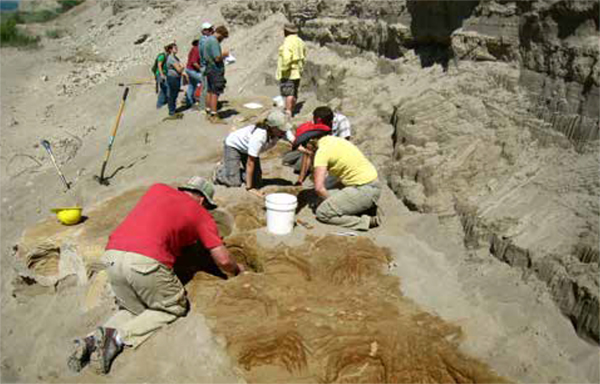 Uncovering of a myriad of mostly Proboscidean (mammoth or masta­don) footprints (foreground) near American Falls Reservoir, Idaho. The effort was a cross-agency accomplishment, including employees from the Bureau of Reclamation, Bureau of Land Management, U.S. Forest Service, and National Park Service, as well as staff and students of Idaho State University and the Idaho Museum of Natural History in Pocatello, Idaho. 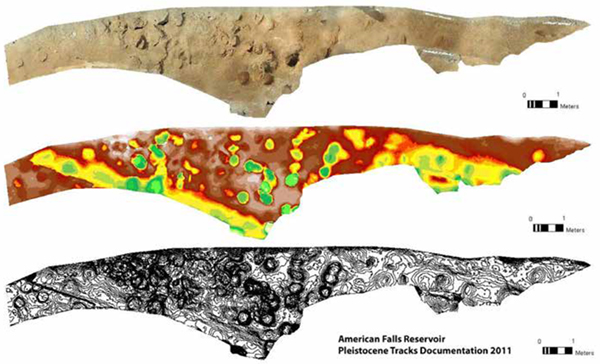 Photogrammetry data involving three different presentations: top view shows raw photos; middle view shows subtle differences in elevation in order to highlight sunken footprints (tracks) - deeper areas are shown in green, a contrasting color from the ground surface level, in order to help them stand out. Bottom photo is a represen­tation of the contour lines, which is a different way that the 3D data can be shown in 2D - the contour lines can be read like a topographic map, wherein the darker, denser line groupings can be interpreted as steeper areas, coinciding with the side walls of the footprint impressions. 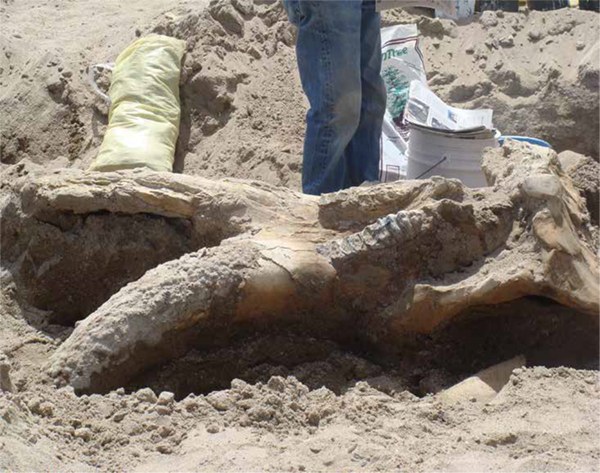 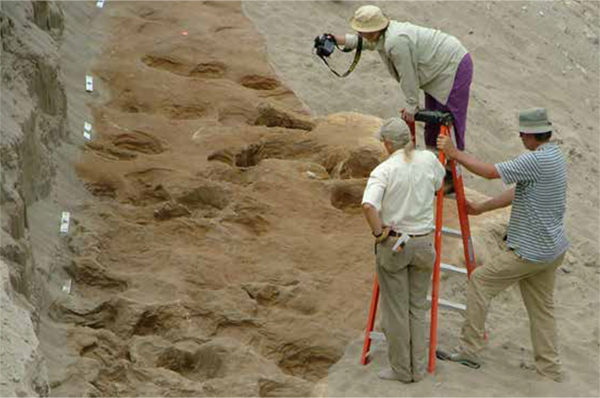