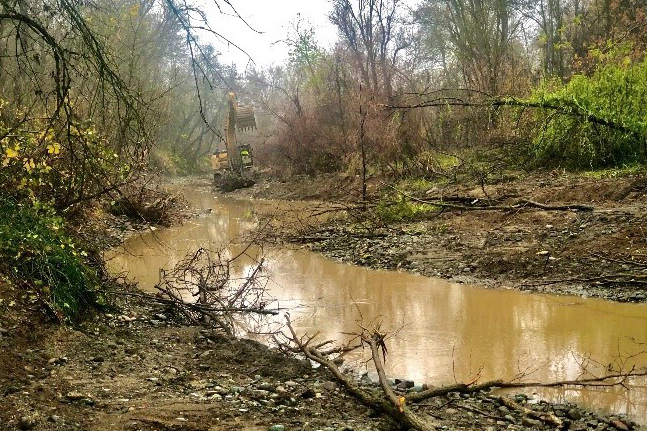 Side channel excavation and woody material placement underway at Anderson River Park (Courtesy photo)SACRAMENTO, Calif. – The Bureau of Reclamation and its diverse set of partners, including the Yurok Tribe, the State of California, the U.S. Fish & Wildlife Service and several non-governmental organizations, completed a new side channel habitat improvement project in Anderson River Park, south of Redding, at the end of 2019.

Previously the downstream end of the channel was a backwater slough choked with non-native vegetation and harboring primarily non-native fish, many of which feed on young salmon. The upper part of the area had many low-lying areas that were perennial stranding areas for juvenile fish. These areas have been connected to the flowing channels. Woody material was incorporated along the channel banks to provide cover for young fish.

This is the first phase of this project with future plans to excavate two additional channels nearby in the same park area. The park land is owned by the City of Anderson and California Department of Fish and Wildlife and is open to public use.

“These multi-partner, multi-disciplinary teams help increase the efficiency of water and financial resources to foster anadromous fish production in the Central Valley,” said Ernest Conant, Bureau of Reclamation Regional Director for the California-Great Basin Region. “Together, we can build on this success to substantially increase natural fish production in the region.”

Funding was provided through the Central Valley Project Improvement Act. The CVPIA recently began implementation of a structured decision-making process guided by experts in aquatic habitat, biology and engineering to help prioritize habitat actions. The process identified the upper Sacramento River as a high priority action area for increasing Central Valley salmon production and to work towards the salmon doubling goal of the CVPIA. This prioritization resulted in five upper Sacramento River habitat actions completed in 2019: two spawning gravel/coarse substrate replenishment projects in the Redding area and three side channel habitat projects from Anderson to Red Bluff.

See press release from California State University at Chico for details of celebratory partnership event on January 10, 2020, 10:30 a.m. at Anderson River Park in Anderson, and 2:30 p.m. at the Rio Vista site in Red Bluff.