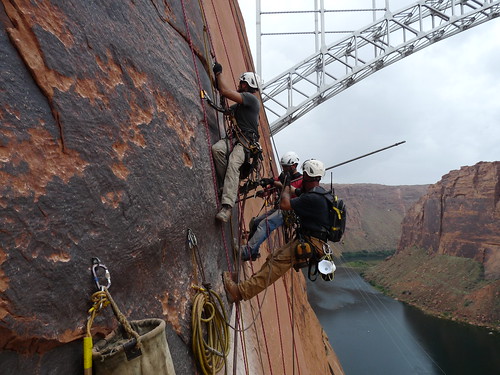 Glen Canyon Dam professionals are in the process of securing the 50-feet high, 30-feet wide and up to 4-feet thick slab of Navajo Sandstone to the canyon wall by installing 6- to 8-foot, 1-inch diameter bolts through the slab and into the wall by specialized Reclamation workers called scalers who drill into the rock and install the bolts while hanging from rappelling lines on the canyon wall.

This particular section is just downstream from Glen Canyon Dam and above a machine shop adjacent to the Glen Canyon Dam Powerplant. This area had previously been identified as a risk and six rock bolts were recently installed to temporarily stabilize the area so additional work could be performed at a later date.

Soon after the bolts were installed, Glen Canyon Dam operations staff reported several small rock falls and a notable crack opening around a large slab Friday, August 28. No one was injured from the rock falls.

On-site security restricted access to outside areas and the river raft operator’s company was notified that they will not have access to the launch ramp at the base of the dam until the large rock slab is secured to the canyon wall or has been removed. Glen Canyon Dam Field Division is working with local partners and vendors to coordinate the restricted access. The rafting restrictions in the area will be lifted when the rock slab is determined to be safe and stable.

The local high-scaling crew is working with Reclamation's Upper Colorado Region Power Office geologists to install rock bolts in the canyon wall upstream of the large slab to prepare a safe area from which to work in order to remove some of the slab in several small sections and secure and stabilize the remaining rock slab to the canyon wall. This work is estimated to be complete by October 2.

The rock fall did not affect operations at the dam, nor will the work on the canyon wall cause any impact to the operations of the dam.